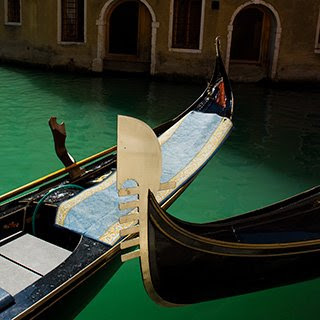 I have returned once again to my beloved Venice, where cars do not exist and church bell towers lean precariously close to falling. Although I have lived here and visited often, I still get lost in the maze of passages that connect various parts of the city. Perhaps, getting lost in Venice is not so bad. Watery canals are everywhere, and over 400 lovely bridges to cross. Gondolas float languidly by, as they have for centuries. It is easy to get lost in reverie. Time seems different. I have been here a week and already dread leaving. The more I look, the more I fall under a spell.
Thank God I have friends in Venice. They open my heart, and especially, I feel fortunate to be able to converse. Regretfully, learning a new language is exceedingly difficult for me. I don’t remember words, and feel frustrated when my mouth struggles to speak in a foreign tongue. Thankfully, others make up for my inadequacy by sharing their own language skills in English. Then, we sit in café’s and share thoughts, or walk through this magical place and tell the wonder of being conscious together.

Posted by Steve at Sunday, April 27, 2008 2 comments:
Email ThisBlogThis!Share to TwitterShare to FacebookShare to Pinterest 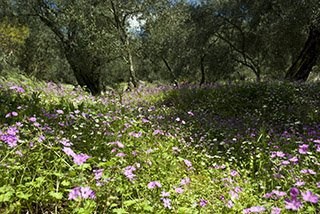 It occasionally happens while I am painting that there is a moment of impasse and I must choose to either continue working in a way I know but that is not proving successful, or else, go into the unknown. Choosing the unknown is fearsome, and yet frequently, something happens—a fresh impulse comes through and a new experience is born. It is like a young bird forced out of the safe nest it has always known. Suddenly it is falling through the air and must fly, never having known what it is to float on currents of air, but a deep yearning takes hold and flight is born.
The first days in Corfu were like getting acquainted, and then came an impasse. Corfu Town is lovely, with cobbled streets, and many reminders of the Venetian culture that occupied it for centuries. Yet I wanted more and decided to rent a car and get out of the city. The first day, I drove in rain and could only look through the windshield. When I returned to my hotel, I flopped down on my bed in frustration. The next day, the rain stopped and sun arrived. Heading north, I became lost on winding mountain roads, and decided to go into the unknown, where THE DREAM lives. Although I was lost, every turn held a surprise, and somehow I felt I had found my destiny. Villages dotted the hills, with roads through them that can barely accommodate two tiny cars to pass by each other. Olive orchards abounded, standing as they have for centuries. Spring flowers bloomed magnificently in the wild, so that I could not pass by, but rather stopped and walked among them. Then, as I came around a bend through wooded hills, an old wall covered in vines and a half open gate made me stop. Peering through the gate, amid an area of tall grass and wildflowers, a old stone building stood empty and open. I felt like a gift had been given, and walked gingerly, aware that I could browse undisturbed and would not bother anyone. To my amazement, the place was an abandoned church over a thousand years old. Inside, in the half-darkened room, I could see hand hewn beams supported the intact roof, while the cracked and damaged plastered walls showed remains of Byzantine Christian images. It felt incredible to my American eyes, unaccustomed to seeing artwork 600 years old except in museums. The more I lingered, the more I felt a special experience unfolded; I stood suspended between centuries, and THE DREAM provided me the inspiration to fly.

To Honor The Gods


THE DREAM is taking me backwards, away from my destination of circling the globe. Instead, I am now circling the Mediterranean Sea. How could I be so near to Greece and not visit? The journey brought me to Athens, and now I am on the island of Corfu, off the northwest mainland. Athens felt cramped, with block after block of plain building facades. The National Garden, downtown, needs some serious pruning and tender, loving care. Underwhelming until my walking brought me to the foot of a hill overlooking the city and sea. On top stands the Acropolis. My tired legs pushed on and healed quickly as I stood next to the marble columns of the Parthenon (begun in 447 BC, and the building was substantially completed by 432). Even with the crowds, and restoration work underway, something told me I was having a peak life experience. It was the same feeling I had when I saw Michelangelo’s sculpture of David in Florence. Awe. How could it have been humanly possible to create? The site is dramatic, and impossibly difficult for the fantastic, grand and beautiful buildings that were erected by hand. It was all done to honor the gods, and the gods must have helped because man alone could not have accomplished it.
Now I am in Corfu, away from big city noise. I hear birds outside my window, and footsteps on ancient stone streets. The six-month tourist season is barely beginning. Shops are sleepy, yawning toward the full awakening of the high season. I flew in from Athens, and learned from the taxi driver that the island practically shuts down for six months; the airport closes during the off-season.
Some loneliness comes and goes. Mostly, it is from being rootless, changing places often, and not having the easy pleasure of conversation and association. The last four countries have spoken Arabic, Hebrew, Turkish and Greek. Anyway, I am experiencing so much . . . and only begun! I have my ticket for a boat that sails all day and overnight from Corfu on the 19th of April to Venice, Italy, where I have a good friend, Cristiana who is waiting for me. And she speaks English! 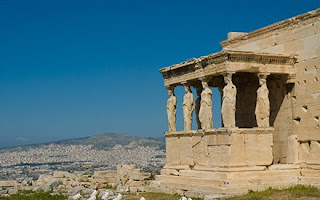 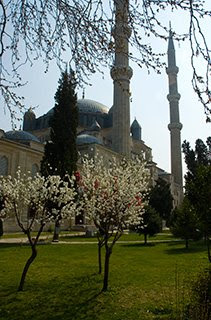 Edirne, near the Greek border, is the last city in Turkey where Baha’u’llah was forced to live in exile outside of His native Persia. During His time, it was called Adrianople. I took a three-hour bus ride from Istanbul and stayed for five days. As we cruised past city and farmland, I sat in a comfortable seat next to a big picture window, and imagined the hardship Baha’u’llah and His family endured in 1863 during a bitter, harsh, winter while traveling on foot for twelve days with little protection against the elements. Baha’u’llah’s son, Abdul-Baha, nineteen years old at the time, suffered frostbite on his feet that caused him pain the rest of his life.

In Edirne, very near to the house of Baha’u’llah is a wonderful mosque called Selimiye, built between 1568 and 1574 and now considered one of the highest achievements of Islamic architecture in the world. As it is at every mosque, shoes must be removed before entering, and women must put scarves over their head. Standing inside, I felt a bit like an observer since I am not Moslem and people were praying. I pray as well, but do not know the proscribed practice of Moslem prayer to be followed. It includes facing Mecca, saying a verse, bowing, turning the head to face left and then right, kneeling and prostrating with forehead to the ground. 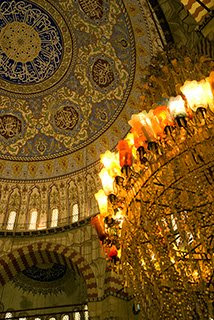 I am now back in Istanbul, in a wonderful part of the city called Sultanahmet. Rug shops are everywhere, and little bistros, anchored by the Palace Topkapi, Hagia Sophia, and the Blue Mosque, also called Sultanahmet.
I have made more friends, and as sometimes happens, offered all kinds of delights, high and low alike, but I choose to be careful and not lose my head in pursuit of every pleasure. THE DREAM gives me the best satisfaction, and it unfolds astonishment that is pleasure enough for lifetimes.
Each day, the weather lightens, and now, as if all of sudden, bright tulips are blooming everywhere. Turkey claims that tulips are its own native flowers, and only later arrived in Holland. I am grateful I have seen them here in their eye-catching beauty. Tomorrow, bright and early I go to the airport to catch a flight to my next stop—Athens, Greece. 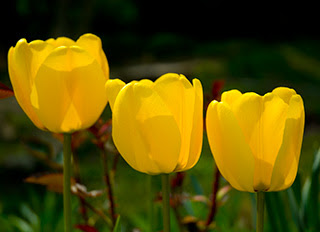