A Shift Has Occurred 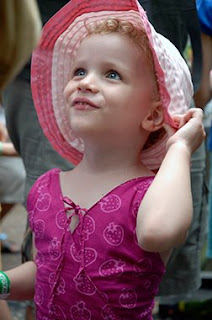 A shift has occurred in the year since I have been away from the United States. When I left, I sensed an unrest and dissatisfaction leading up to the presidential election and also a hopefulness and determination. Now, a month since my return, it seems despair and gloom is in the air, with constant news of calamity and hardship. We have a new president who is tackling the immense problems, and even he is saying not to expect too much quickly. I see the change clearly, because I stepped outside the unfolding drama for 50 weeks and now have returned to it with a fresh outlook.
My studio sale of exotica from afar has begun, and I can see that people are timid about spending. I wonder if I was crazy buying over 200 objects. On the other hand, the items all have more value than I spent, and will not decrease in worth, and even in some cases, such as the oriental carpets, continue to appreciate, even while financial markets spin downward.
A shift has occurred in me as well. I am positive all my hours. Occasionally I get angry; for instance if I break something nice or lose my keys and I am in a hurry to go somewhere. But the upset passes and then is gone for good. THE DREAM has so much to give me, and like a child I receive the gifts and embrace wonderful life. The material world is not where my treasures are saved, but Spirit gives me all that I need and my investment is safe there. I stay thankful, and I am not worried about the future because it will be rich in experience and give me what I need. 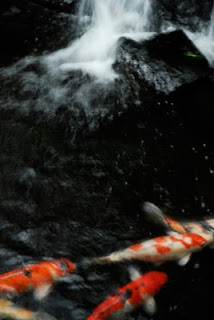 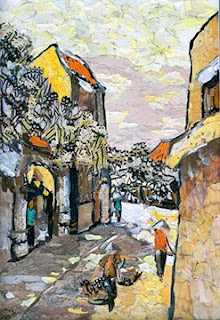 People ask if I am having difficulty adjusting to “being back.” Not really, except that for the past year I did not live anywhere longer than three weeks, and now, I have a street address again. I see with new eyes, and clearly notice that American society is largely based on consumerism, and status based on acquisition. Every day we are barraged with advertising that tells us we need to be better off in life, and subsequently most people think that they are falling short, because they do not have everything that “experts” insist that they need. God forbid if you do not have a house and car, and wander from place to place with barely any possessions. Maybe I am an anomaly, but it is why I could relate so easily to everyone everywhere I went. I have no pictures in my head of how things “should” be, but what life gives me in present moments is incredible. What more do I want? Often, the answer is nothing because the intangible greatness that lies within each heartbeat is entirely satisfying. Maybe this yearning to live purely in moments is what drove me to travel as I did. Perhaps, in the end, I felt trapped and harassed in a consumer-oriented society and wanted more than stale offerings. Now, I am in the game again, but oddly feel detached. 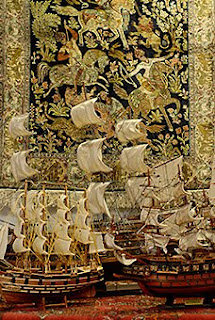 In my studio, beautiful things that I collected overseas surround me; wooden sailing ships, hand-knotted silk rugs, paintings made entirely from butterfly wings, and more. If I do not sell them quickly, it is okay because they give me pleasure. Further, they remind me of the greater world . . . and connect me to other moments, earlier in THE DREAM. Next week, people will begin to come to look at these things, and I will enjoy sharing the beautiful objects from far off places. Sometimes, I will have an intimate story to tell.
To see some of the items I collected, click, Steven Boone’s World Bazaar.
Posted by Steve at Sunday, February 15, 2009 No comments:
Email ThisBlogThis!Share to TwitterShare to FacebookShare to Pinterest
Labels: American, bazaar, beauty, consumerism, possessions, status, world 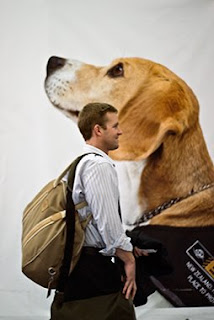 My trip around the world has broadened my inner sphere and given me more confidence than ever. It seems a bigger picture has developed and little things do not stop me the way they once could. Also, I know how to search for the beauty in the occasion, so that I go with the flow in the unfolding moment. For instance, last night, I visited a friend for dinner. We were supposed to go to a movie, but she was not feeling well, so I might have stayed only a short while. During dinner, she said a special program was on television—a ceremony honoring the famous, recently deceased comedian, George Carlin. Her plan was to spend the evening alone nursing her illness, and I was going to leave quickly, but once the program came on, we sat on the couch, and began laughing. The moments of laughter stretched on, and I realized that the current time mattered most, and that sitting on a couch beside my sick friend, eating popcorn, watching television with a comic genius on the show was enough to let everything else fade to the background.
Returning to America from afar, I know again some of the qualities that make it special, and especially appreciate that it is a land of great possibilities. America is a free and open society, and despite its many problems, opportunity and prospects exist everywhere. If you have a dream and are bold, you can manifest your idea, and find other people who share your vision. More possibilities exist here than anywhere on earth.
Now, my “big picture” will develop further . . . the moments are full and the future waits with promise.
Posted by Steve at Sunday, February 08, 2009 No comments:
Email ThisBlogThis!Share to TwitterShare to FacebookShare to Pinterest
Labels: America, George Carlin, opportunity, popcorn

Become The Path Itself 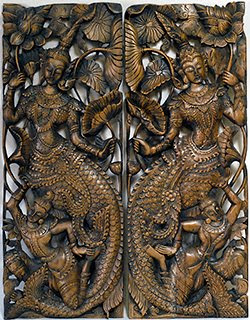 I am two days late writing my blog . . . and this after uploading faithfully each weekend for 50 weeks traveling around the world. I blame it on “stuff”, and maybe that I am suddenly grasping for a topic to write about. The “stuff” is mostly personal tasks, like contacting the collection agency that is chasing me because I did not answer the ten bills from an eye clinic that were sent to my post office box while I was away. (I thought I had paid in full.)
I am glad all the “stuff” I bought overseas is arriving, but now I have to inventory and sell it all. How could I have known that when I returned, everyone would be afraid of the economy?
A proverb says, “The journey of a thousand miles starts with a single step.” I am so grateful to have experienced circling the big, wonderful world, and being exposed to its many colors and textures. My love for the planet is deeper than ever, and I have knowledge to give this feeling breadth. As I stepped forward, I embraced the journey, and felt safe within what I call THE DREAM. Guatama Buddha said, “You cannot travel the path until you have become the path itself.” Four months ago, I visited the site where Buddha received His enlightenment under a Bodhi tree in Bodhgaya, India, and sat with monks meditating. There are so many stories to tell, it brings to mind something Oscar Wilde said, “I never travel without my diary. One should always have something sensational to read in the train.” 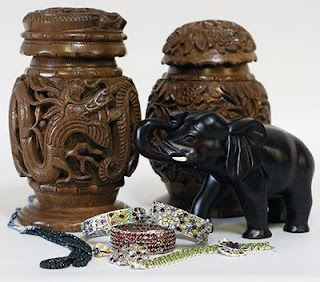