Furthermore, often there is great mystery in creating art—and it is not easily put into words. Accidents come into play (that are not accidents at all), and the art seems to breath and have a life of its own. Sometimes I finish a piece and when standing back to look, I catch myself saying, Wow, did I do that?


I have been making three-dimensional art recently and often, hands are included. The one shown here is new. I wanted to use a hand with forearm. It had to be situated so that it expressed itself. I had the thought that it could be dragging colors with fingertips across the white ground. To cover the arm, I had the idea to use pieces of broken mirror.

As I broke a mirror into bits with a hammer, a piece struck me in my left eye. Ouch! Then I thought, How stupid of me. Why was I not wearing eye protection? Thankfully, I did not need to go to an emergency room and my eye was not cut. That was several days ago and it is still sore. I wonder why my left eye was injured (everything that goes wrong with me or suffers injury is on the left), and I also ask if it was fate that by breaking a mirror, which held my image, I would feel torment? Oh well, as they say, "No pain, no gain."

Now that the art piece is done, I will make an attempt to interpret it:
The white rectangle ground represents purity of space. White contains all the colors. The hand represents human endeavor, and art. It is interacting with the white, bringing forth colors that plays from fingertips.
Color is vibrant life, like the inner life of an artist. The bits of mirror reflect light and the real world. They are broken in fragments, but recreating to be part of a whole—coming together to be part of the magic artist that is expressing inner life like reflections in a mirror.

As I finished, I decided to pour white over the colors streaming from the fingertips, to soften their notes, and further the mystery of coming forth from an enveloping matrix.

One day I noticed that I could go on working my art motif no matter what the weather might be. I no longer needed the sun, for I took my light everywhere with me. (Georges Braque)

My recent 4 ½ months of traveling is now in a ½ hour clip of photos, video and music.    Enjoy.

Posted by Steve at Sunday, May 22, 2016 No comments:
Email ThisBlogThis!Share to TwitterShare to FacebookShare to Pinterest
Labels: Around the World, freedom, Global, joy, sojourn, Travel clip

Place Of Not Knowing 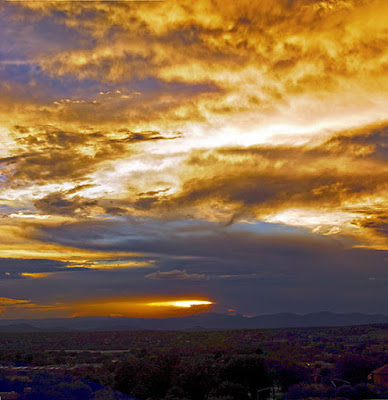 A person dear to me and I have had many conversations about dreams, symbols, imagination, spiritual paths, esoteric thought, psychology and perception. We both easily jump into the same deep pool. We share books and are both in similar soul searching processes, seeking higher truths that lead to rebirth in spirit. She dreams and remembers them. I do not remember my dreaming. When she shares her dreams that are so full of rich symbols and extraordinary happenings, I sometimes am breathless. 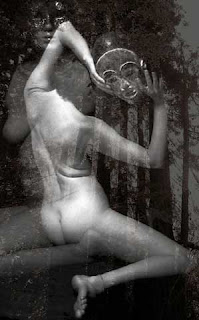 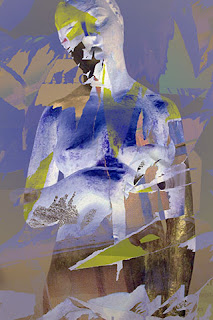 I often think that life is a big DREAM. Fantastic surprises come and go frequently. We are often in wonder and awe. Mystery surrounds us and permeates every atom of our existence. It is the realm that poets, visionaries and seers draw from. It is why I call this blog My Fairy-tale Life.

Rather than be suspect of mystery, I relish the place of not knowing. It is full of potential. It calls me to be creative.


I tire quickly when I am bound to pragmatism and dogma. Thank God I can be an artist and make use of dreams, symbols, flights of fancy, flesh, blue skies, storms, crumbling earth, crashing ocean waves—all impermanent.

Life in THE DREAM. 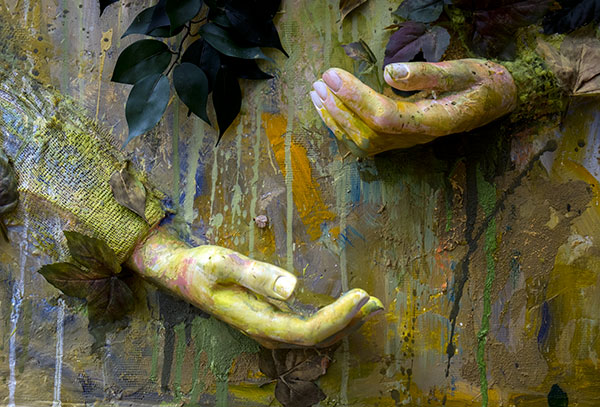 Hands are essential to human life. How many poems have been written about them? Hardly any. Yet, think about it; we use our hands to make the world we live in. We grasp tools, drive vehicles and go places, feed ourselves, express ourselves, make music and art, write, climb, lift, caress and make love, hold babies . . . hands give us mobility, life and progress. 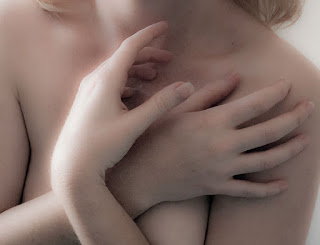 In art, hands are among the most difficult part of human form to convey. They are complicated appendages. 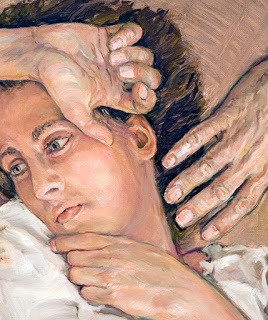 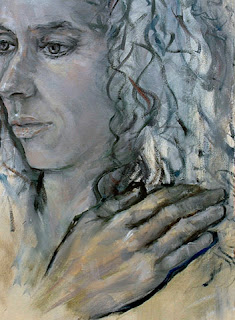 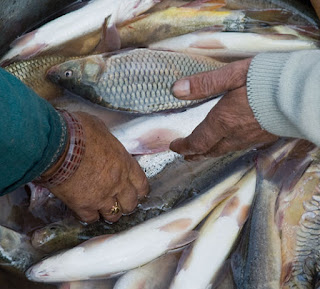 Posted by Steve at Sunday, May 08, 2016 No comments:
Email ThisBlogThis!Share to TwitterShare to FacebookShare to Pinterest
Labels: Art, creation, grasp, Hands, music, Poetry 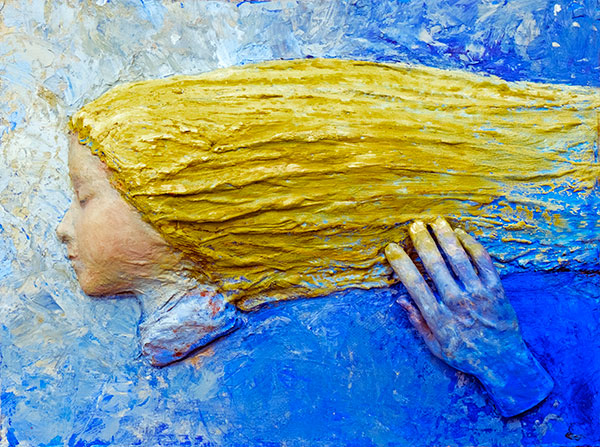 Imagination is the beginning of creation. You imagine what you desire, you will what you imagine and at last you create what you will. -George Bernard Shaw

The best art allows us to see with our own eyes, but brings us into revelation. Our vision and perception gains strength. A chord is touched inside of us so that we say, “Aha.”

When it goes public, a piece of art is owned by all, so to speak, and open to a myriad of interpretations. From that time forward it is objective and subjective both. The risk an artist takes is that he may value his work highly, but the public does not.

When a new movement in art comes along, it often is met with resistance and some ridicule. It asks the viewer to take a different path from the norm, and often, the viewer says, “You foolish artist, I know what good art is. You can't fool me! The tried and true is apparent to all, so why should I go down this suspicious path with you?” In modern times, this is what happened to the first impressionists, and much later, also the abstract expressionists. First ridicule and resistance, and then through persistence, passion and devotion, a warming occurred with people. In these cases, it took years along with the slow gaining of important allies in the art business, and then the public was swayed. Now there is adulation. Just look at Van Gogh's life. 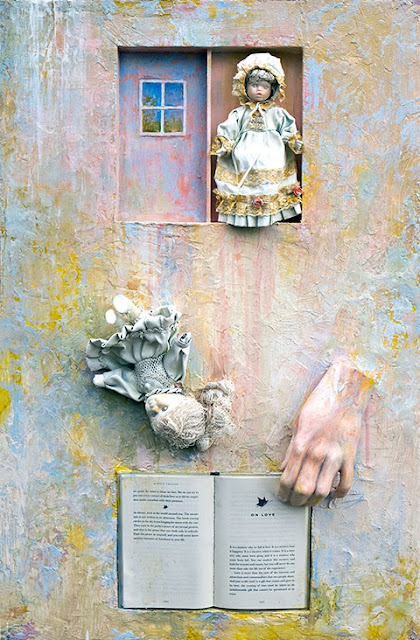 I have started creating art that is a departure from my past. It just seems to be the time, and I have the passion and will to walk a new path. I have not lost anything, I can always go back. Recently, I have been constructing my paintings as much as painting them. They begin with an idea that is fed from my unconscious and I go from there. There are two now, with more coming. The finished peieces are in the public realm since people have seen them—mostly online. I am not showing them in a gallery at this time. Being public they are both objective and subjective now.

As an example of how this type of art can evoke a wide range of subjective responses, I will tell of the interpretations from different people as they viewed my last piece. The main parts are: two dolls—one standing and one falling, a niche where one doll stands and one has fallen from, a window, an open book turned to a chapter titled, “On Love”, and a hand seeming to come from thin air and holding the book open.

A close friend of mine was the first to see it complete, and as we discussed it she formulated a story that the two dolls were actually the same person. She is both standing and also toppled over and entering the realm of the book; falling into the story of love while the Hand of God holds the book open.

Another person said that at first glance it made her feel like someone is trying to hold onto LOVE.

Someone else wrote on Facebook: “People told me to be 'perfect'. Perfect like a doll... Then, some people gave me books leading to imperfect worlds... I took your hand so that I could grow into something I would never have imagined...”

Another Facebook friend wrote: “This is a dream world, and perhaps it has a touch of adobe wall of Santa Fe and old walls of places you've traveled. There is hope and life coming through the top window, so close yet set apart from the innocent girl, the fairy tale girl, with the perfect outfit, part of whom has lost control and fallen,(or perhaps some inner part of the dream has fallen) almost, perhaps it will be a surprise to her, into a book, which seems to be orderly - can't see the title. She doesn't know it but part of her falls into some type of order that this hand, old as the wall, ancient like the soul, has touched. The figure at the top might be mourning for loss, while the hand feels the order of that book, not reading it or holding it, but feeling it. It is a left hand of the intuitive, inner self. Some dream perhaps fallen yet into a book. The hatted doll is in a bit of a precarious position but so close to the window of hope. Perhaps she represents external fantasies (letting go. Just a few thoughts. She is hatted like the men you painted, but here is a feminine aspect, perhaps an inner child waiting to be helped down or through that window. the book is quite balanced...I mean the two pages, like yin and yang. Perhaps the hand knows in this book is the balance. If I want to trip on it, it could be a person, with the doll at the head, the doll and the hand the arms and the book the feet. The head then would have part in life and hope and part in image, possibly fantasy or a young female sense, the hands part letting go and part holding on to the feet holding to balance, truth. But I wouldn't want to project onto it...(ha, ha, smile).”

And now, I confess that my original conception was for the two dolls to represent a sort of fate for two different people. One who would stand firm in life, bearing witness to the window of life and the Book of Love held by the hand of destiny (or God), and the other who falls.

I like all the descriptions and they all work! Art is objective and subjective. That is the fun.

The artist is a receptacle for emotions that come from all over the place: from the sky, from the earth, from a scrap of paper, from a passing shape, from a spider's web. -Pablo Picasso