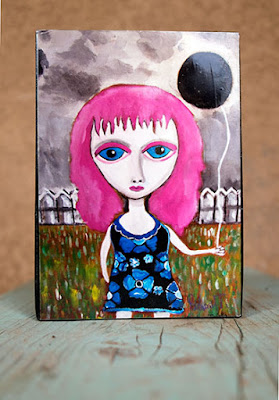 I found her among skeletons, ravens, and a very odd assortment of other characters. She wears a cute blue dress and stands in a yard under a cloudy drab sky, holding a black balloon that bobs above her head. Her huge blue eyes stare blankly into mine, and are accentuated by pink mascara that goes with her flaming pink hair. Her tiny mouth is decorated with the same color.


Standing in a booth at Spanish Market here in Santa Fe this weekend, I asked the artist who made her about the price and when he replied with a small sum, I said I would take her. I thought she would fit in with the eclectic menagerie on my kitchen windowsill. 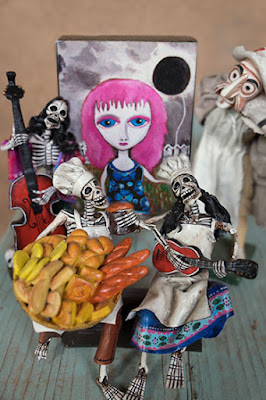 A couple weeks ago, my previous purchase was at the International Folk Art Market from an  artisan from Chile. He made skeleton figures doing normal things. I bought a skeleton with long black hair—singing and playing a red cello. I brought him home and placed him with a bony couple holding a basket of bread and playing a guitar.

The latin cultures have a way of celebrating death and making it part of life.


Now I can move my little skeleton figures around as I choose and let them tell stories. They go with my ceramic rabbit, clay figurine ballet dancers, doll with angel wings, bust of Thomas Jefferson, and flying nude girl with arms outstretched and a star on her toes. The circus grows steadily. 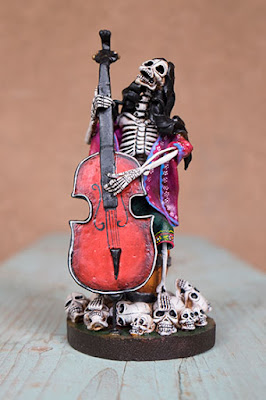 From my perch atop the wood fence behind my tenement apartment in Chicago, Illinois, if I spied the delivery man driving through the alley I gave him a shout out: Hey fat man! The big negro would smile, wave through the open window and respond with a cry, Hey skinny boy!  It became a game for both of us. I was four years old. 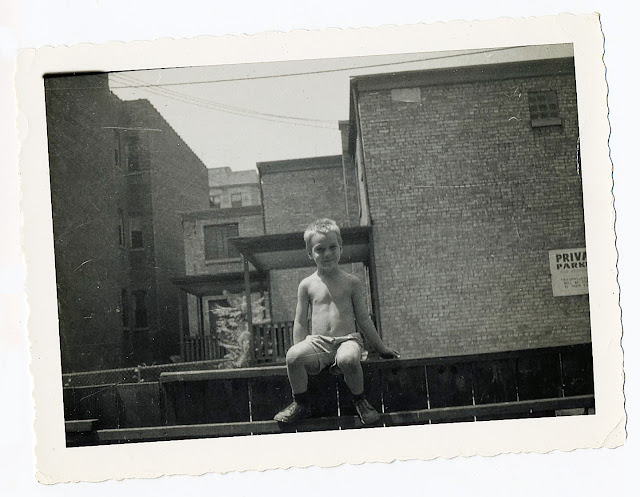 My father was finishing his studies for a master degree in criminology at the University of Chicago. On the side, he worked two jobs to support his young family. We were poor, but I did not know it. My mother stayed at home, minding me and two younger brothers.

I had a tricycle that I rode on the pavement behind the apartment. One day a woman was hanging wash on a line and I accidentally bumped my bike into her pail of clean clothes. Oh my, did she lash out scolding me. It was the first instance of human rage I ever experienced. I began crying loudly. My mother came outside, gathered me safely in her arms and apologized to the neighbor. I remember mother was embarrassed—another new feeling to me. Thus the beginning of learning about differentiation.

I played at a nursery school in the afternoons. It was a big place in Hyde Park for the children of poor families. We had guided play, meals, nap time on cots, and recess where we ran outdoors on a concrete playground that had a stagecoach in the corner. My first playmate was Darnell. He was black and I am white but neither of us knew. We did not know how to differentiate. I can still remember the love between us and pure joy of innocent comradeship. We were soulmates!

Our building was heated in the winter by a furnace in the basement that burned coal. During the cold months, a huge mound of black rock was piled out back. The building janitor was responsible for keeping coal in the furnace. He became friends of ours and one night my father took me to see him shoveling coal into the furnace. In the darkened room, the fiery furnace sounded with roaring flames. The iron doors opened. I stood at my father's side, reaching to hold his hand. The fire was at my eye level just feet away. I felt the warmth and saw the dancing light—like magic. Then the doors shut with a clang and we went upstairs. I could feel the love of my father and the janitor. They too witnessed the simple beauty of the moment; made special through my first experience of it.

I always slept with my brother Wade. One Sunday morning when I woke up, he was not beside me. I went to my parents and asked where he was. He could not be found. We looked all over. My mother was so frantic she looked under the living room couch although it only had an inch of space. In despair, the janitor was called upstairs to help us. I went in the darkened closet near my bed. Lifting up a pile of dirty laundry on the floor, there was Wade—fast asleep. Everyone gave out a cry of relief and some laughter followed.

I will never forget my mother getting down on her knees and looking under the couch.
Posted by Steve at Sunday, July 23, 2017 No comments:
Email ThisBlogThis!Share to TwitterShare to FacebookShare to Pinterest
Labels: biography, brother, Chicago, coal, differentiation, emotions, Fat, furnace, Love, Memoir, memory, play, poor, Psychology, Race

The World Comes To Me

I abandoned my art gallery today and joined a procession of pilgrims.

This weekend Santa Fe hosts the International Folk Art Market. It is hugely popular—a once yearly event that draws people near and far like a magnet. This Saturday in the afternoon, I joined the masses of people taking shuttle buses up to the Folk Art Museum where the festival takes place. 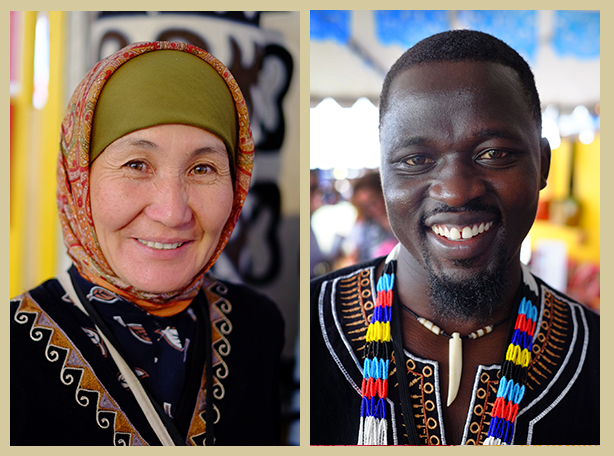 My main two interests were to photograph the amazing display of humans from around the globe, from 140 different countries all dressed in native garb amidst their handcrafts, and also to buy a hat. The colorful skullcaps I have purchased in the past wore out from plentiful wear. 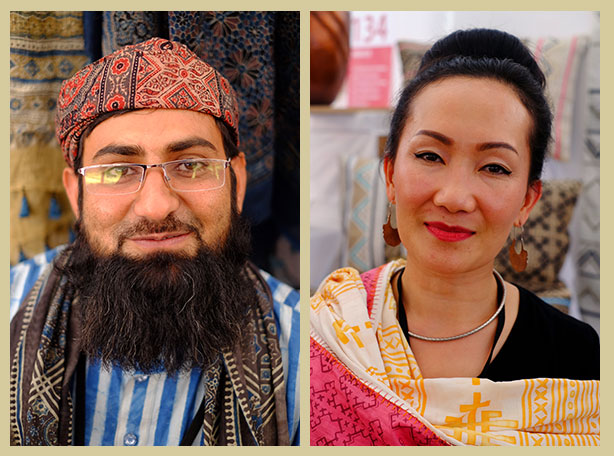 Fate smiled on my aspirations for I took plenty of pictures of beautiful people—and found my hand embroidered hat, made by a native of Uzbekistan. Her name is Gulnora Odilova. 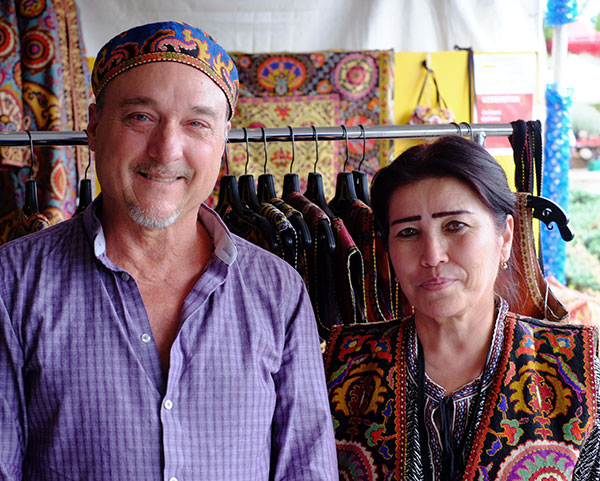 I have traveled thousands of miles and been around the world twice, visiting many places, but once a year in Santa Fe, the world comes to me. I so enjoy it!

The world is one country, and mankind its citizens. -Baha'u'llah


Other articles I wrote about the International Folk Art Market:
A Gem In The Crown 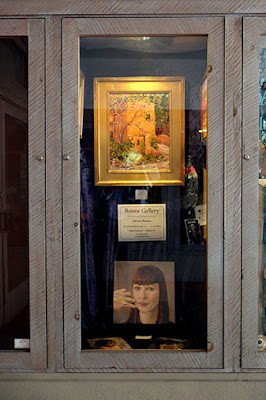 Almost everyone has known the pleasure of gazing in glass store windows. There is a name for it: “window shopping”. The allure is in tasting the eye candy without having to buy. It is a treat to just look and then move on.

My art gallery is in a pedestrian mall on the central plaza in Santa Fe, New Mexico. Santa Fe is a major tourist destination in the USA. It is rich in history, is tri-cultural including Anglo, Hispanic and Native American people, is free of pollution and sits among mountains, is the state capitol, and a famous art center.

Boone Gallery advertises my artwork in a glass display case that is in front of the building on the street bordering the plaza. It is lit all the time and can be seen round the clock whenever anyone stops to look.

The other day, July 5th, was the anniversary of my daughter's death. My assistant worked half the day. I was supposed to go in the afternoon, but did not have the will to go open up and meet the public. Late in the afternoon my phone rang. I noticed the phone number was from Virginia and thought it was an advertiser so did not answer. The next day I saw that the caller had left a message. Turns out that someone had been “window shopping”, and wanted to make an appointment to see my artwork. When I called back, we had a nice chat and I learned that he liked my art and wanted to see more. 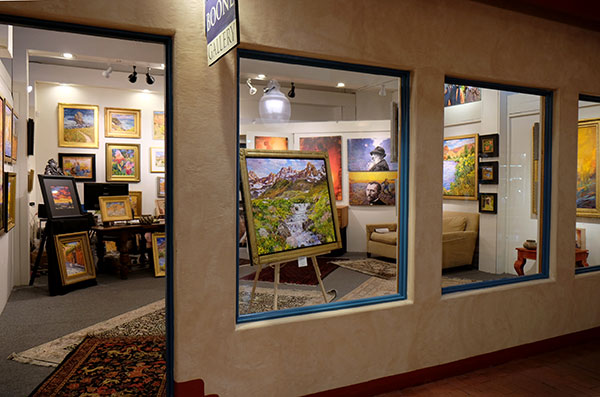 I met the man and his wife at my gallery and they narrowed their choices down to four paintings. The woman left and the man stayed with his friend—deciding. He had a budget and so I offered him a discount for buying more than one. In the end, he bought three.

Window shopping started it all. 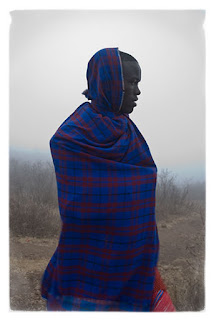 I fell asleep thinking of lions. They prowled the area of Ngorongoro Crater in Tanzania, Africa where my tent was pitched near the rim. In the dead of the night I woke to the sound of something massively heavy crushing and pulling the grass just steps away. On my cot listening, I briefly fantasized being pulverized into the earth, and then fell back asleep. 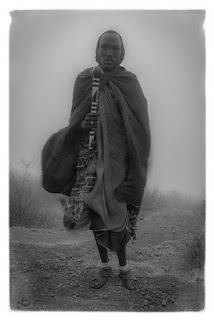 A water buffalo had come into camp.

In the morning chill and fog, as we made our way down to the flat crater plain, I encountered a couple young Masai men. The others in the small group of safari travelers shied away from the native africans, but I always was drawn to engage with them. This morning we met as they were stepping from the mysterious  shrouded bush and I was just waking from my dreams—and the water buffalo and lions.

I took some photos and now treasure the images as reminders of wildness, Africa, and the wonderful Masai who I chanced to meet. 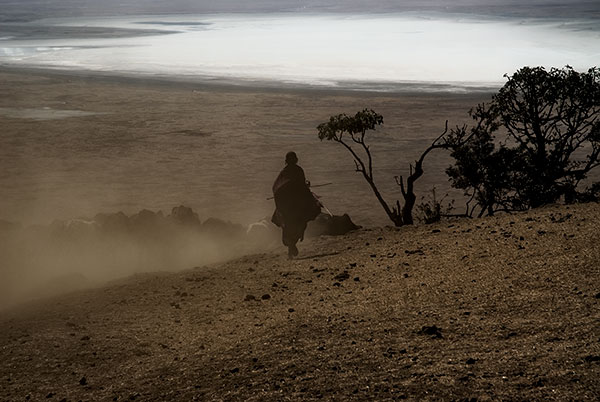