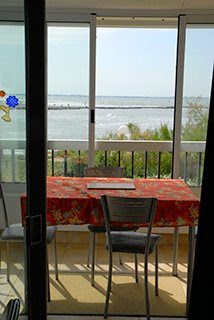 Now, when I wake in the morning, the sound of the Mediterranean Sea is present. It is directly in front of my eyes, churning outside the little breakfast room. There is almost always a fisherman perched by the shore, casting into the waves.
Frédérique is just next door in another apartment, and we wake each other in the morning with a knock on the door. I find so many surprises in her. She has told me we are opposite . . . and it is true. She is quite controlled, and lives in her intellect, while I am tactile and thrive in the realms of senses. Her opinions are frank, thoughtful and unequivocal, while I am more starry-eyed, in the land of mystery. We both share passion for art.
Fortunately, Frédérique is on holiday, so we spend all our time together. She is showing me the region of Provence in the vicinity of her home in Grande Motte. Her grasp of history is good, so I have an excellent guide as we stroll through streets in towns such as Montpellier and Nimes that began before the medieval age. Last night we went to Aigues Mortes, a small, nearby town within original fortified stone walls. We attempted to find seating at several restaurants but were turned away, even though they seemed half full. Frederique told me that France is not like in the United States, where patrons come and go all evening. A limited number of dinners are served, and a table is used once. If a table is reserved, it sits empty until the client arrives. When we found a restaurant that took us, to my astonishment, the elderly hostess was the owner, director, and also the only waitress. Frédérique explained that if there were more employees, then wages would be paid, but also an equal amount in social security taxes for the worker.
The most memorable part of dinner was the une entrée, called “Tellimes.” They were fingernail size clams, baked in a tasty cream sauce and sprinkled with herbs. Simply put your hand in the bowl, pick one up and suck out the tender morsel of flesh. This is what the sea churns up, elaborated and made into food in the French way. Frederique said that there are over 7000 unique recipes in France. The next greatest number is Italy, with a little over 1700. 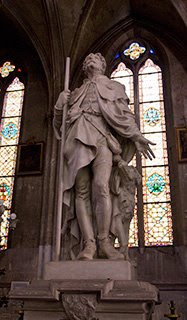 Posted by Steve at Sunday, May 11, 2008
Email ThisBlogThis!Share to TwitterShare to FacebookShare to Pinterest