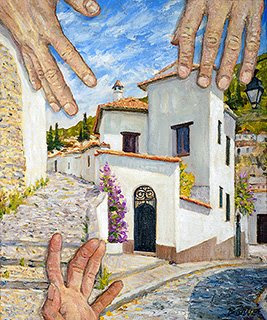 The surface of the moon became a stage when the astronauts landed there, and Madrid became my stage when I landed here. I have taken to the streets with enthusiasm and enjoyed the wide avenues, fashions, museums, street performers, vagabonds, and café life. My apartment is in the midst of it all, so I am part of the pulse. The Indian consulate issued me a visa, Nikon fixed my lens, I took a thousand photographs, made a new “three hands” painting, and visited some of the best museums in the world. The weather has been perfect, and I have not had a bad day.
Thyssen-Bornemisza Museum houses an art collection that originally was collected by the Thyssen-Bornemisza family for over two generations. The largest and most important part, over 800 important masterpieces, was acquired by Spain in 1993. It is one of the finest and well-organized bodies of art I have seen, and kept in a palace originally built in the 18th century, and then expanded and remodeled. The artwork spans the ages from classical to modern. A fantastic, large, Caravaggio painting, called Saint Catherine of Alexandria caught my eye in a prominent position in a smaller room. I arrived at the same time as two other admiring people, and within minutes we began talking with each other excitedly. Francesco is Italian and Deniz is from Turkey. We all understood and appreciated art and could talk about it, and fortunately for me, the other two spoke good English. Deniz happens to be an art historian living in Berlin, but she lived in Venice for two years and speaks Italian. I am an artist and know quite a lot about art, so our conversation stayed elevated. Francesco became animated and took us around to other important Italian paintings in the collection, talking all the while. The paintings themselves offered us topics and thrilled our senses. This is what art does; speaks to our common humanity in a universal language. It breaks barriers between people and offers dialogue.
Click artistic photography to see photos by Steven Boone of the streets of Madrid. 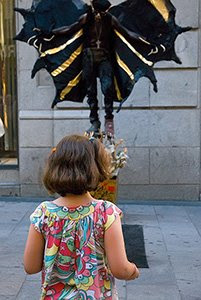