What Happened to July 8th? 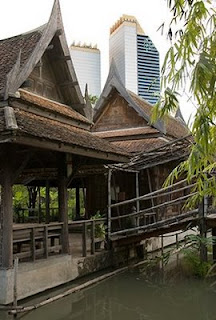 Certainly, traveling long distances is mind altering. I boarded a plane in New Mexico that took me to Los Angeles, where late in the evening July 7, we took off on a sixteen-hour flight to Bangkok. I had already booked a hotel for my arrival on July 8, and made arrangements with my Thai friend to meet me at the airport at 9 AM. Then, during the flight I heard an announcement that startled me. We were landing July 9. Quickly, a nightmare unfolded in my mind of my friend waiting for me. I checked with a flight attendant who suggested I use the airplane telephone and call. My friend does not speak English so the attendant had to do the translating. Fortunately, we spoke, but I learned that my friend had been waiting five hours. Ughhh! I felt as though I was in an episode from the Twilight Zone, completely vaporizing a calendar day—July 8, 2009. 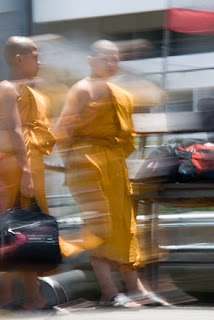 I have been in Thailand four days now, and although it is the rainy season, it has not rained and the days have been beautiful. After Bangkok, I am now in Chiang Mai, the second largest Thai city, in the north of the country, and getting a feel for life. Thai people are very polite and warm. I am getting used to seeing occasional elephants, hearing strange instruments played in the streets and riding a motorcycle everywhere. Last night I went with my Chiang Mai friend to dinner in a restaurant that has a huge buffet with raw foods of every kind. Servants bring drinks and then, after selecting your courses, you return to the table and cook your own meals over a big round broiler that looks like a big hat, with a raised middle for cooking meats and seafood, and a circular pan (brim) that boils water and makes a flavorful broth to cook vegetables, shrimp and more. It takes only minutes and is fun. You can cook and season to your own taste, and eat when you like, going back for more ingredients whenever you desire. The food stays hot and fresh right in front of you. All for less than five dollars a person. This one meal a day could be sufficient to live on.
Could I live here as an artist? I will begin to find out in the next days.
Some facts about Thailand. 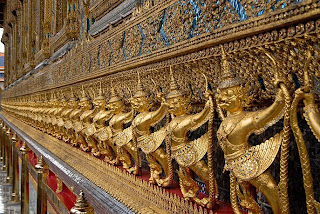