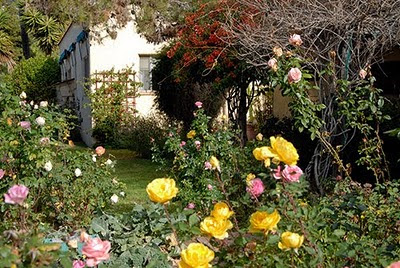 “You don't really understand human nature unless you know why a child on a merry-go-round will wave at his parents every time around - and why his parents will always wave back.” ~William D. Tammeus

“Parents can only give good advice or put them on the right paths, but the final forming of a person's character lies in their own hands.”
~Anne Frank

I am in Santa Barbara, California, after driving 940 miles (1513 km) from Santa Fe, New Mexico. My parents cleared out a small room and put in a bed for me. They live a humble existence of contentment in a very beautiful place. Their home is on a corner lot, and surrounded by a tall, neatly trimmed hedge, a lawn and a scattering of tall pine trees. An orange tree in the yard is covered with oranges, and some of my mother’s fifty rose bushes continue to have magnificent blooms, even in winter.
My priority now is simply to be available to my elderly parents who move slowly, and walk with small careful steps. Their old dog moves even more leisurely. They take naps each day and retire promptly each night at 9 PM. My mother has taken to speaking of death, and especially is concerned about the care of my father if she were to die soon. Yesterday, she had to go to the hospital emergency room because she did not urinate for twelve hours, although she was drinking plenty of fluids. My father has the beginnings of Parkinson’s disease, and his speech sometimes is halted, but he nonetheless drove my mother to the hospital and ordered me to stay home and take care of the dog.
Santa Barbara is situated on the Pacific coastline and has five beaches. I can ride my father’s bicycle to the ocean, then take long walks on the beach. As I think of my parents, I imagine I see them frolicking in the waves, getting knocked down in the surf, but getting back up for more action. Eventually, they will continue weakening and the waves will be too strong for them. Someday, a wave will knock them down and they will not get back up, but drown and then become part of the ocean itself. The same will happen with everyone, for we are born upon the shores of this life and live here only briefly before being taken back by the sea of eternity, what I call the matrix.
Posted by Steve at Sunday, January 10, 2010
Email ThisBlogThis!Share to TwitterShare to FacebookShare to Pinterest