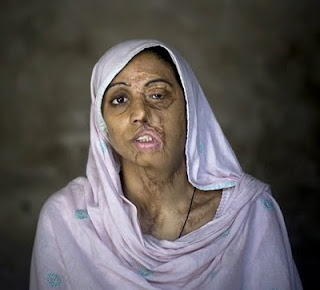 Sometimes the cruelty of this world is dumbfounding and so insulting to our senses that we recoil immediately and simply withdraw. I remember as a child when I saw someone with a mutilated face from burning, or another with missing or deformed limbs, how I felt afraid, as if beholding a monster I had only met in dreams, but now, here it was in real life. My mother would calm me and say, “Do not stare.” But the unfortunate person would ultimately be shunned because of fear.

Now that I am grown, I have no fear of people who are “different”, but rather, compassion for the great burden that they must carry all their lives. Recently, I came across a story on the Internet about victims, mostly female, of acid attacks. These young women usually were attacked because they simply asserted themselves as independent. Then, a spurned suitor or inflamed man attacked with acid, directing it at the victim’s face. It is terrible the damage that is done. See the article: Terrorism that’s personal.

In August of last year, while I was in Saigon, Vietnam, I met a young man begging on the street who was the victim of an acid attack. That week, I wrote my blog and reflected on the term “monster” and what it really means. See my blog, Monsters.

Misfortunes such as starvation, stillbirths, illnesses, have always afflicted humanity but what is truly mystifying and pointlessly tragic is the suffering humanity inflicts upon itself.

When will the human family rejoice in unity and fellowship and end the suffering it has long inflicted upon itself? Only when we see each other as precious . . . not as the “other” but as beloved.
Posted by Steve at Saturday, April 17, 2010
Email ThisBlogThis!Share to TwitterShare to FacebookShare to Pinterest
Labels: beloved, compassion, cruelty, Fear, hate, human family, Love and tragedy, Monsters, suffering, terrorism