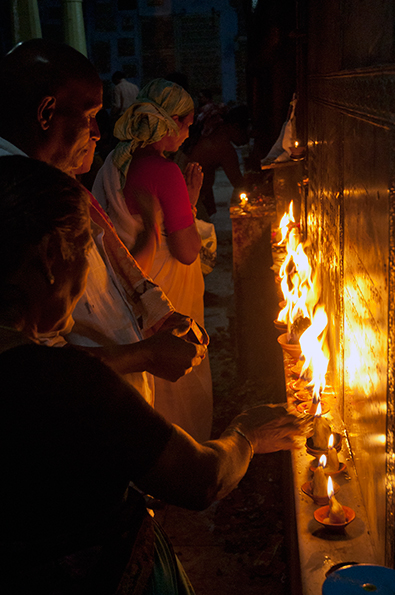 All creatures have eyes, to navigate the physical realm, and these eyes are miracles of creation. How is it then that while we humans sleep with our eyes closed, we see fantastic places, and witness events unfold? For this, an inner eye must exist and be open. Many a time, a person has awakened from sleep, and opening their eyes to familiar surroundings, also recalled fantastic visions that remain fresh in the mind and spirit. How often has it come to pass that later, a person has appeared exactly as seen in a dream. This is the clairvoyant power of the inner eye. The word “clairvoyant" has its origin in 17th century French, from clair ‘clear’ + voyant ‘seeing’—clear seeing. Clairvoyance is deemed supernatural, meaning beyond natural law.

The thing is, we struggle for our physical existence, but not our inner life. So the physical needs are much more pressing and seemingly, urgent. Therefore, we elevate the senses to the top, and let our inner eyes languish. Furthermore, people become suspicious of what they cannot physically see and even reject life beyond the senses. The seventeenth century German writer Jacob Boehme, (probably April 24, 1575 – November 17, 1624) wrote, “for he who sees nothing says nothing is there; what he sees, that he knows, and further he knows of nothing but that which is before his eyes.”  The Confessions of Jacob Boehme, by Jacob Boehme.

My belief is that what our senses perceive is infinitesimal, and that our inner eye can perceive far more, if we open them to our conscious mind. Recently, I read in the Baha’i writings:

“Man is in the highest degree of materiality, and at the beginning of spirituality—that is to say, he is the end of imperfection and the beginning of perfection. He is at the last degree of darkness, and at the beginning of light; that is why it has been said that the condition of man is the end of the night and the beginning of day, meaning that he is the sum of all the degrees of imperfection, and that he possesses the degrees of perfection. He has the animal side as well as the angelic side, and the aim of an educator is to so train human souls that their angelic aspect may overcome their animal side. Then if the divine power in man, which is his essential perfection, overcomes the satanic power, which is absolute imperfection, he becomes the most excellent among the creatures; but if the satanic power overcomes the divine power, he becomes the lowest of the creatures. That is why he is the end of imperfection and the beginning of perfection. Not in any other of the species in the world of existence is there such a difference, contrast, contradiction and opposition as in the species of man. Thus the reflection of the Divine Light was in man, as in Christ, and see how loved and honored He is! At the same time we see man worshiping a stone, a clod of earth or a tree. How vile he is, in that his object of worship should be the lowest existence—that is, a stone or clay, without spirit; a mountain, a forest or a tree. What shame is greater for man than to worship the lowest existences? In the same way, knowledge is a quality of man, and so is ignorance; truthfulness is a quality of man; so is falsehood; trustworthiness and treachery, justice and injustice, are qualities of man, and so forth. Briefly, all the perfections and virtues, and all the vices, are qualities of man.” ‘Abdu’l-Bahá, (Persian, 23 May 1844 - 28 November 1921) Some Answered Questions
Posted by Steve at Sunday, December 11, 2011
Email ThisBlogThis!Share to TwitterShare to FacebookShare to Pinterest
Labels: Baha'i, existence, eyes, faith, inner eyes, perception, spirituality, vision