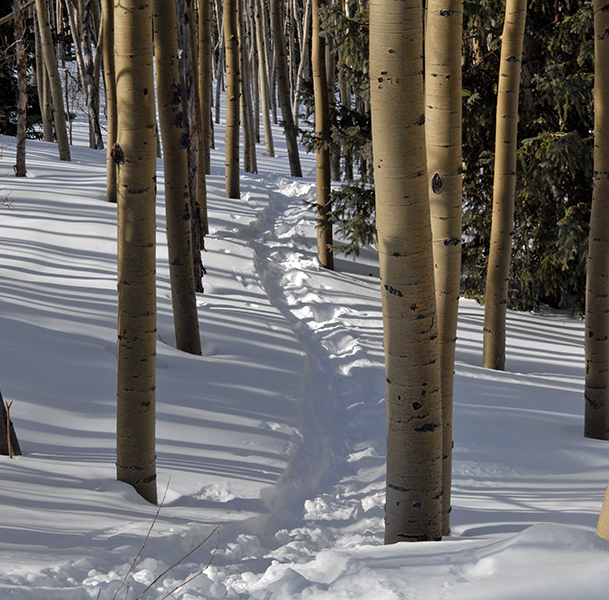 It is remarkable how different are the charms of a forest from season to season. Now, in winter, our forest in the Sangre de Cristo Mountains is covered in deep snow. Heidi Of The Mountain’s and I arrived at a popular trail this morning just after sunrise, put on snowshoes, and along with our puppy, Chamo, hiked into the magical woods. The only sound to be heard was the crunch of snow under our feet. 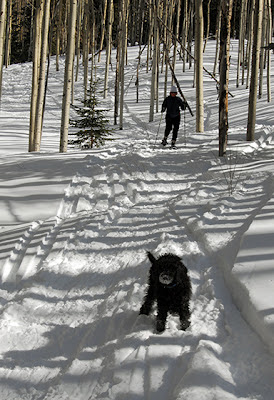 Chamo had his first adventure in snow. He is an enthusiastic puppy—a poodle with jet-black curly hair. It is wonderful to see him when he joyfully bounds in the air with all feet off the ground. Soon, he played games with snowballs that he created with his jumping. The bits of snow rolled in balls down the steep slope, and he liked chasing them just ahead of his nose. The trail is packed from skiers and hikers, but is softer on the sides. Heidi, who adores Chamo watched in delight and then horror as Chamo chased a snowball into the powder, sinking with each step but continuing on until he was in over his head and could not move. “Steven!” she cried. Chamo struggled and managed to turn himself around, thrashing the snow but sinking. He managed to clamber back up the hill, but midway, another snowball rolled away and he went after it. “No Chamo!” we both shouted at once. He had become a snowball himself, whiter than black. “Steven, save him!” But I did not want to go down the hill. A few minutes later, Chamo managed to hop and thrash his way upwards, his nose barely above the snow, then reach Heidi’s arms on the trail. He has puppy energy, so we continued our hike while I pondered if there was a moral to the story of Chamo’s adventure chasing snowballs into the unknown. 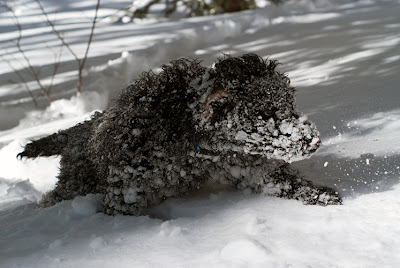