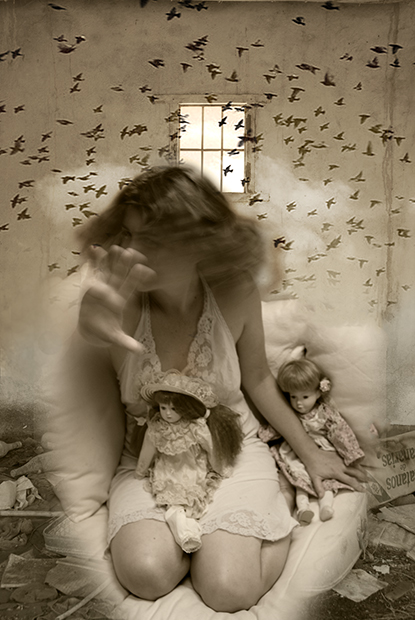 A dark story to go with the picture I made, above, which is a composite of photographs:

As a child, a young woman, who we shall call Jill, lived in a chaotic household with her younger brother and parents. The father had a violent temper and drank heavily, especially while home from his job as a mailman. Jill’s mother was prone to depression, and numbness of feeling, so barely kept the household in order. In earlier days for the family, some happiness existed, but the home went into a downward spiral with the father’s anger and drinking. He could become abusive when he was drunk, hitting the other family members and cursing. The mother once found John, Jill’s brother, had taken old photographs and a recording of his father, speaking affectionately to his wife during happier days, out of a drawer. She walked in to a room where the boy, entranced, was playing the recording to a friend, and became hysterical, crying and furiously scolding at once. John, even at an early age, dreamed often of leaving home.

Jill too, especially as she reached her teen years, thought of escape. But when she dreamed, terrible fear eroded her heart. She felt responsible for her mother, and wondered, “Who will protect her and be her aide?”  Yet she hated the house and its dark energy. It felt inhabited by ghosts.

Jill felt unworthy of finding someone to take her away. Although a teen, growing into a woman, she still played with dolls, alone in her room. She sat them up beside her and talked to them. And she dressed them in pretty outfits . . . better than anything she wore herself.

After high school graduation Jill stayed at home and made small efforts to find work. She did not have a sense of style, so could not know how hopeless she looked. More and more, she stayed in her room and fantasized, so to escape the anxiety that gripped her chest and the dark thoughts that invaded her mind—thoughts that would suddenly come upon her out of nowhere, like a flock of dark birds, circling her very soul.