Art For The Heart 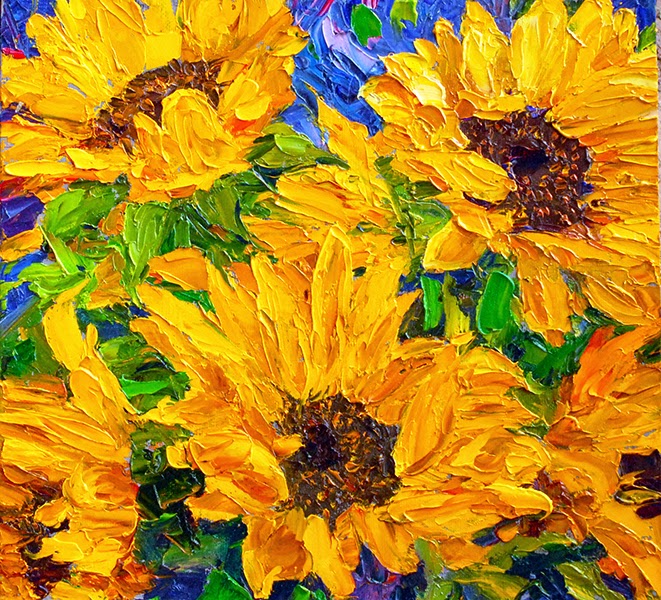 An older couple came into The Steven Boone Gallery, browsing with pleasure the rooms full of art. They eventually focused on sunset paintings and mentioned that they were newly arrived in Santa Fe and were just beginning to visit art galleries. The two were dressed casually, and the gentleman seemed about ten years older than the woman—maybe in his early seventies. They left, and when they did not come back that day, I forgot about them.

Two days later, just before noon, the two arrived back, and I exclaimed, “Happy to see you again!” The man replied, “We came back because of you.” They browsed slowly through the gallery while I stayed near them, assisting, but keeping a respectful distance so that they could focus on the art. They eventually agreed between themselves what two pieces they liked best, and purchased them. One painting was a buoyant group of open-faced sunflowers, and the other was a sunset with bright colors at the horizon and an old dirt road entering the picture from the foreground and heading toward the distance.

I asked the man his occupation and he replied that he is a cardiologist. The two collect art, and have visited major museums around the world. I asked if he had been to the Van Gogh Museum in Amsterdam, and he said, yes, and that he studied Van Gogh's life from a medical perspective too. While writing a check, the woman looked into my eyes and said they enjoyed, “Meeting the artist. “ I replied that it is also my pleasure to meet the people who buy my art, because my paintings are like children and it is good to know where my children go to live the rest of their days.

I thought later, that the man seemed to have a full heart when he was with me . . . and the art contributed to his happiness. How appropriate that he is a heart specialist then . . . and it made me think of slogan: Art For The Heart.