A few days ago, I received a phone call from one of my mother's caretakers who sounded urgent and exhorted me to think of going straightaway to her side at her home in Santa Barbara, California; although I live 900 miles away in Santa Fe, New Mexico. Immediately I became troubled and doubtful. My mother has had close brushes with death in the past. How could I be sure of the right time to be with her when she passed away? I asked the other caretaker as well, who concurred that my Mom had suddenly declined and might be on the way out. She suffered irregular heart beats, and her body was retaining fluids, although medication helped somewhat. She was on oxygen as well. I explained that I could not be going back and forth, but that I would come if the opinion was that I might not see her again. 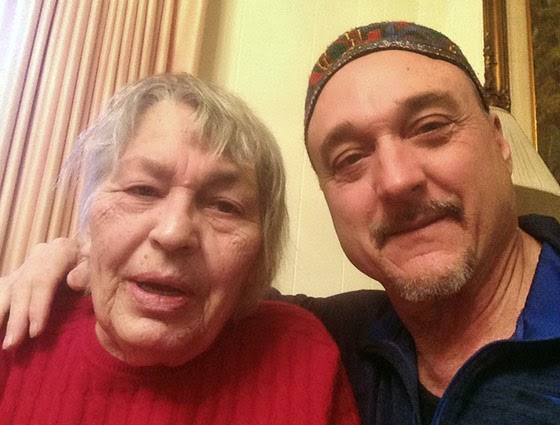 I booked a one-way ticket, not knowing the course of future events. In one day, I arrived at my mother's side. She was sitting in her favorite chair at the dining table, next to a big picture window where she can watch the birds in her yard. Beautiful roses were in vases on the table, fresh from her garden. We hugged and she said, "Steven, I am so glad you came!" By the evening, we were playing gin rummy—and she beat me.

Sometimes, her sentences wander off into nonsense, but most of the time, her mind works normal.

My daughter Sarah was concerned enough that she has also arrived to pay last respects . . . but maybe my mother will be doing the jig next. She barely walks, but I don't put it past her to dance at her own funeral.