A Life Of Its Own 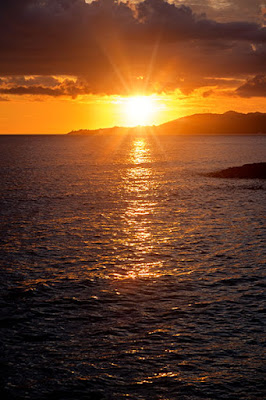 Traveling in THE DREAM has a life of its own. All experiences are essential and woven together, and cannot be labeled or isolated by the dreamer. They unfurl like a flag in the wind, ceaselessly changing shape. When I arrived in Sanur, Bali, I spent the first night in a hotel near the airport, since my arrival from Cambodia was after midnight. The next day a short taxi ride brought me to a homestay I had booked in Sanur, in a densely populated neighborhood not far from the beach. The hostess from Finland met me, along with the Balinese owner of the house who lived with his family in the rear. Cia, the Finnish woman showed me around and I put my things down in my room. Immediately, I felt a bit sick to my stomach, and when alone, went in the bathroom and vomited. I realized that something was amiss. The room was windowless, and had a shallow light, peculiar smells were in the air, the furnishings were worn and drab, and I felt unsettled.

Cia is a short woman and underweight. She drinks and smokes, and I soon learned that she is battling lymphoma cancer and has large tumors on her neck. Her mind is bright, and she smiles readily, but there is a darkness settled around her. I discovered that she cannot eat because it causes her pain, but drinks beer and smokes cigarettes.

I never had the thought of leaving, and spent seven days with her. I didn't feel comfortable in my physical circumstance, but I am not physical. THE DREAM brought me to Cia, and I came to appreciate her and could relate with her because I lost my Naomi to cancer and walked with her for two years through the valley of the shadow of death. Cia has been living in Bali for five years and has a wealth of knowledge about the island and its culture. She speaks at least four languages, is an ardent animal lover and takes care of them wherever she finds they need help. Three cats and a dog have found her and stayed to live with her. She is pragmatic and accepts her condition in a matter-of-fact way.

One night at dinner she mentioned she was trying to make a doctor's appointment for the next day. I told her I would go with her so she would have company and not feel alone. Her eyes opened wide and she stared at me and said, “But you are on vacation, you don't want to do that!” I looked back straight in her eyes and said, “Yes, I do.” Her jaw dropped, and looking even more intensely into my face she said, “I believe you.” And then she started to cry, and apologized. Later I told her that the two years I spent in close communion with Naomi, by her side through all her medical treatments and living with her in foreign cities, was the best time of my life. “We were burning the candle at both ends.” I said.

I left Cia a couple days ago and THE DREAM put everything in place for me. I found a lady from Bali who is renting me her car. Anne, a young woman from Finland who is a friend of Cia's has given me the keys to her bamboo house up the coast in a place that Cia wrote on her list of places for me to visit. I am now in the bamboo house, making paintings, visiting nearby villages, swimming in the sea, taking photographs, and continuing creatively.

Cia said, “There is a reason we met.” We will meet again. I left a few of my things with her so must return before leaving for New Zealand in about a week.

Read and appreciated, especially about the part of you going to the doctor's appointment with her, and you not being physical.