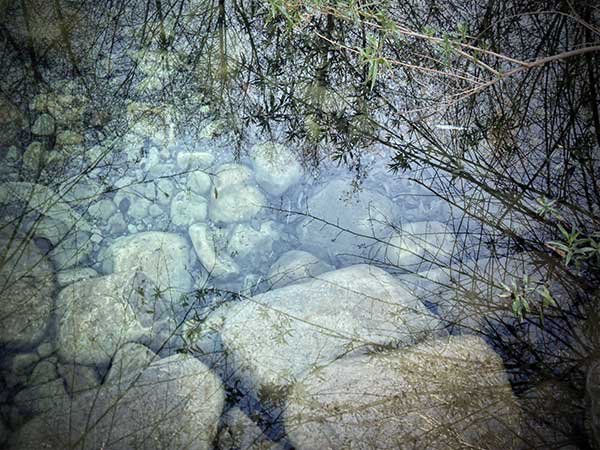 After some searching, a friend and I arrived by car to a hidden oasis in the mountains above the serene southern California town of Ojai, where hiking, spiritual retreats, fruit orchards, as well as a farmers' market on Sundays contribute to the city's self-styled nickname of "Shangri-La" referencing the natural beauty of this health-and-spirituality-focused region. The place, ( it does not want to be named in social media), has hot springs, and it is rather hidden. We had to ask directions several times and almost gave up looking. Its sign had fallen down and when we pulled in to the parking lot a smiling young man came out of a trailer and said yes, we had arrived.

I had not seen my friend in decades. She learned I was in Southern California and contacted me about meeting. We had determined Ojai, because I remember when my parents lived there, and wanted to revisit. After a cup of coffee and conversation, we had re-established our friendship and were on our way.

The oasis usually charges $20.00 for two hours, but waived the fee because my Mom had just died. An agreement form must be signed when entering the property and when I learned photography is not allowed I was baffled. The young man said that the hot springs are “clothing optional.” My friend and I looked at each other and grinned. Neither of us had brought swim suits and were not prepared to get naked. As we started down the trail, I was wondering to myself if I would go nude or not.

The day was balmy and warm. We had picked from a basket of free fruit and sipped free filtered water and I was being transported back to my days of being a hippie, when I had visited and lived in Ojai. A happy wave of nostalgia took me to carefree youthful days being a wandering nature lover with long hair and eyes of wonderment, mind full of poetry, and heart of song.

When we came to a split in the path, one sign pointed to the hot springs and another to a bridge across a creek. I asked my friend where to go and she chose the springs. So off we went. When we arrived, there were some people bathing in the pools, with swim suits on. The property only allows a limited number of visitors at two hour intervals. We found our place in pools surrounded by rock. I undressed down to my underwear and she just went in with clothes on and soon was floating on her back with a big smile on her face. A sense of calm and happiness quickly came over both of us. I contemplated all the fantastic experiences of the last four months traveling around the world, and concluded that life itself is a journey of surprising circumstances and experiences.