Smiling From Ear To Ear 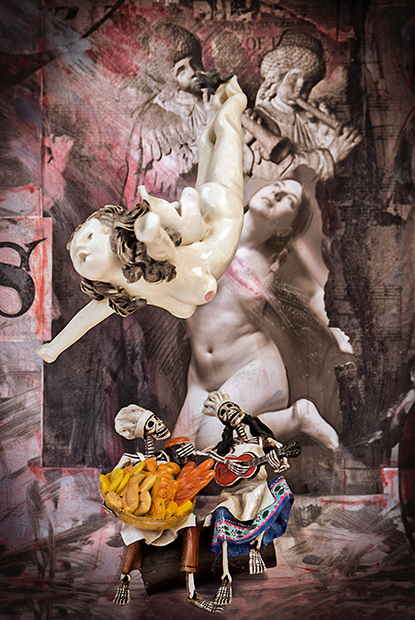 Despite every effort, when a famine spread throughout the land, a man and his wife succumbed to starvation. First the man. His wife loved him so dearly that she hastened in his footsteps. Then they were together again happier than ever. They were skeletons—just bones with no meat, but looked as beautiful as ever to each other.

One day they went to sit by their favorite piece of art . . . an immense painting of a young woman naked and gazing up into the heavens, in front of two young musicians playing flutes. They were in good spirits and laughed, joking about their former life and how hungry they had been. The woman put on a baking apron, a bakers cap, and took a guitar out and began to play and sing. The man had a bakers apron on and found an immense basket full of bread loaves that he put on his lap as he sat next to his wife. He had his bakers hat on too and sang along gleefully.

An angel heard the singing and arrived to see what all the merry-making was about. She hovered above the couple, and when they looked up and saw her, they both stopped singing. The man spoke and said, “Do you know that you are naked?” The angel smiled and replied, “I am not naked. It is you two that are naked . . . you have not an ounce of flesh on your bones!” At that, the husband grinned at his wife and both of them broke out laughing. The woman began playing her guitar again and both sang together in such perfect melodies that the naked angel soared in circles around their heads, twinkling her toes and smiling from ear to ear.
Posted by Steve at Sunday, July 17, 2016
Email ThisBlogThis!Share to TwitterShare to FacebookShare to Pinterest
Labels: Afterlife, angel, couples, famine, guitar, laughter, Naked, skeleton, song, starvation