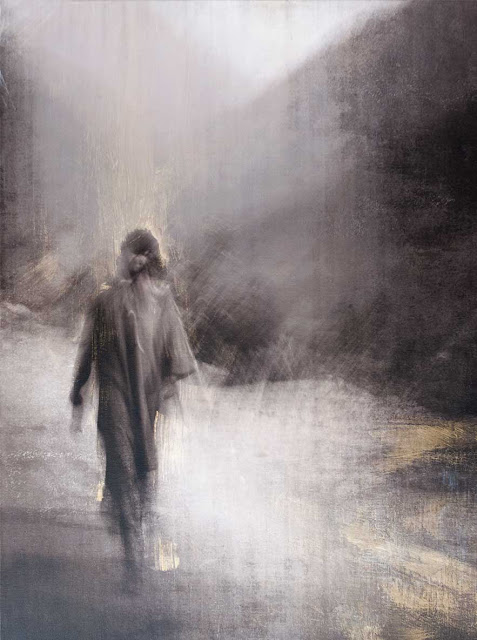 Two women came into my gallery recently, went straight to a new work and then stood in front of it talking. It was as if a conversation was occurring that included the artwork. In the picture, a loosely defined person is seen walking toward us in relaxed manner. He is dressed in a robe that could have been worn a thousand years ago. We cannot tell where he is for the details are blurred. He seems surrounded by light that illumines an otherwise dark scene. Golden rays seem to fall upon him from on high. Illumination surrounds his head.
“What does that remind you of?” asked one woman to her friend. “Yes, I know, “ answered the other. “Footsteps.”

Just then another woman walked in, and was asked, “What does it remind you of?” “Footsteps,” she answered.

I talked with the ladies a while and explained that the piece is a photo I took in the Himalaya Mountain region of Kashmir. I was coming down from a trek late in the afternoon and as my car with driver passed this fellow, I turned around, leaned out the window and snapped his picture. It had been a remarkable day and this moment was part of it.
I sold a print of the original to one of the ladies and learned that “Footsteps” is a poem, formally called Footsteps In The Sand, without a known author. I read it years ago but had forgot. Here is this poignant verse:


Footprints in the Sand

One night I dreamed a dream.
As I was walking along the beach with my Lord.
Across the dark sky flashed scenes from my life.
For each scene, I noticed two sets of footprints in the sand,
One belonging to me and one to my Lord.
After the last scene of my life flashed before me,
I looked back at the footprints in the sand.
I noticed that at many times along the path of my life,
especially at the very lowest and saddest times,
there was only one set of footprints.
This really troubled me, so I asked the Lord about it.
"Lord, you said once I decided to follow you,
You'd walk with me all the way.
But I noticed that during the saddest and most troublesome times of my life,
there was only one set of footprints.
I don't understand why, when I needed You the most, You would leave me."
He whispered, "My precious child, I love you and will never leave you
Never, ever, during your trials and testings.
When you saw only one set of footprints,
It was then that I carried you."
Posted by Steve at Sunday, December 25, 2016
Email ThisBlogThis!Share to TwitterShare to FacebookShare to Pinterest
Labels: Footprints, Himalaya, Kashmir, mixed-media art, poem, Poetry, symbolism, walking