Sometimes the best experiences happen for me when I am lost.

The other day I set out walking in a new direction from my apartment in Cuenca, Ecuador. Usually I head toward the city center with its bustling streets, shops, cafes, grand cathedrals, and corner parks. This time I went in another direction. I went exploring—like Columbus when he set out to navigate the Atlantic Ocean without a map. He charted a course as he sailed.

The streets were mostly residential and rather unremarkable. Traffic whizzed by in each direction. I came to a corner and spotted a high wall that seemed to go an entire block. In the middle stood a tall gate. On either side were stalls selling flowers. I guessed it was cemetery. I like visiting graveyards in foreign lands. A few weeks ago I ambled about for more than hour in Nuestra Señora del Cementerio de Guadalupe in San Miguel De Allende, Mexico. It was divided between a large part for Mexican interments and a smaller closed area for mostly American ex-patriots. Now I had found a vast, much larger burial ground with three times as many graves. It is called, Cementerio Patrimonial De Cuenca.

As in Mexico, most of the crypts are stacked in cells of concrete, in blocks perhaps fifteen feet high and hundreds of feet long. Sometimes there are two levels and stairs to reach the top. Each burial site is marked and decorated in front, often with a glass pane protecting the contents. It is by far neater and more orderly than the Mexican graveyard. 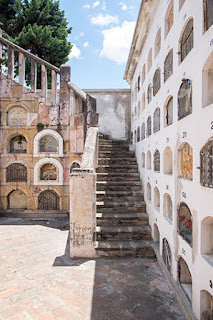 I am fascinated by what remains after a person dies, and how they are remembered with fondness. I lost my daughter when she was nineteen and had to find a spot to bury her. She lays at rest in Santa Fe, New Mexico, USA. A simple grave marker of marble is decorated with roses and bears her name, dates of birth and death, and the inscription Blessed By The Glory Of God.
As I walked slowly and thoughtfully, sometimes I would stop to take a picture. Turning a corner, to my surprise often a vista of tombs would spread before me. And almost nobody was there but me and some attendants working the grounds. The air was perfect on my skin and blue sky with occasionally fluffy clouds overhead. I could almost hear myself think.

To my surprise, at one point I found a block of grave cells slightly smaller and noticed they were for the pequeños niños, little children. Stuffed toys were seen in many with endearing notes. Some didn't have date of birth, only death.

In the afternoon, I set off in the familiar direction of downtown but angled onto a street I had not been. A long wall two stories high without windows had a small single entrance. A couple were coming out the door. They looked like tourists. I stopped and peeked past the threshold. It seemed the museum was full of religious objects. I was not sure I wanted to pay for entry. It was cloudy and about to rain. Perhaps because I was exploring and not in a rush, I entered.

Immediately I began relishing the place—formerly called Convent of the Immaculate Conception, begun in the year 1599. There are two stories surrounding an inner courtyard open to the sky above. The second floor has an open hall with railing that goes completely around the courtyard and you can look down upon it, with the trees, shrubs and flowers and tidy order of it all. The wood floors and stairs are smooth and polished from wear, as well as the stone floors on the ground level. I imagined all the feet that tread there, and the footsteps of the nuns and sisters. So much devotion had occurred in the spot that I felt blessed being there, as if absorbing spiritual vibrations where the closely knit devotees of Christ for hundreds of years dwelled their hours, years and sometimes, lives. I imagined their tight bound community and the rituals they obeyed in sisterhood.

The collections are made up of 64 paintings of religious themes and about 250 religious and costumed sculptures, as well as toys, furniture and handicrafts. What particularly struck me were incredible sculptures depicting saints. Made by mostly anonymous artisans, they all had great feeling and conveyed a master touch to bring out devotion in the viewer. A few were playful. Some figures were wood, others fired clay and painted to be lifelike. They might even have human hair and glass eyes.

By the time I left, I had gone slowly throughout the former convent, and taken many pictures. Fully satisfied, I made it home before the rain.
Posted by Steve at Sunday, February 12, 2017
Email ThisBlogThis!Share to TwitterShare to FacebookShare to Pinterest
Labels: burial, Cemetery, Columbus, convent, Cuenca, Ecuador, explore, grave, Mexico, monastery, Naomi Boone, religious, San Miguel De Allende, sculpture, tomb