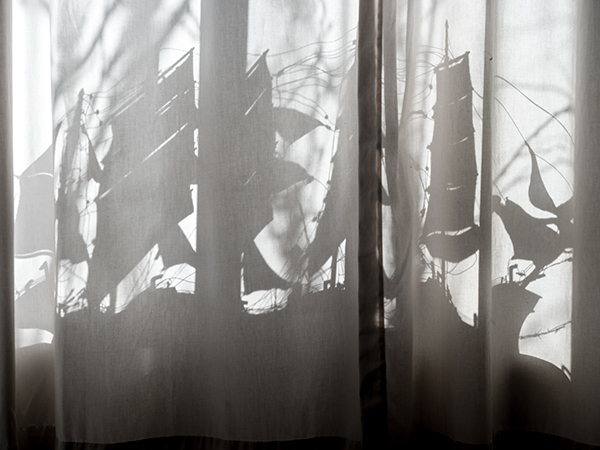 Life is a kaleidoscope of sensual surprises.  During travel, I leave familiar surroundings to engage in the unknown and see with fresh eyes, hear with new ears, and think new thoughts. All the while being mesmerized and awed by little revelations. Yet even without going anywhere, the kaleidoscope of patterns, sights, sounds, tastes and smells is always turning; a bite of cold wind across the face, coming indoors to fragrant aromas of cooking foods, hearing the song of a strange bird for the first time, a fabulous sunset or sunrise.

A surprise can be simple and appear like a gift from an unseen hand. I have deep windowsills at home. In my bedroom I placed a model of a sailing ship on a window ledge. Recently, before taking a nap after lunch, I pulled the curtains closed. After rising, I went to the curtains and saw the ships shadows cast upon the fabric. It captured my imagination and I went and got my camera. The rippling folds of cloth were like ocean waves that took my vessel into an etheric sea. Why did I notice it? The winter light and angle of the sun made the picture come to life. Also, I was willing to see . . . because if my emotions and thoughts had been obscuring my perceptions, the little shadow theater would have had no attraction. I had seen it before. Now the elements lined up to capture my senses and I was ready. 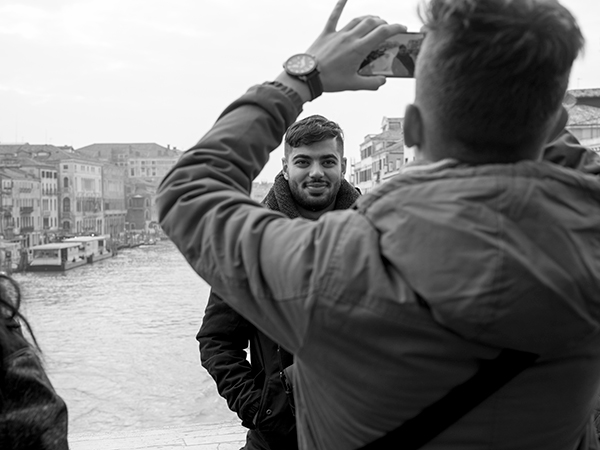 I like happy accidents and am open to experiencing them during my creative process. Recently, during my month sojourn in Venice, Italy, I fell into a hobby of making photographs of people taking “selfies.” World famous Rialto Bridge was just minutes from my flat. Everyday, thousands of selfies are made there. So whenever I was passing over the bridge, 2 or 3 times a day, I would linger to photograph. Once, I spotted two fellows making a portrait, and surreptitiously became involved with my camera. Just as they were composing, I shot my picture from behind, capturing the subject’s face through the triangle of arm, shoulder and head of the picture taker. 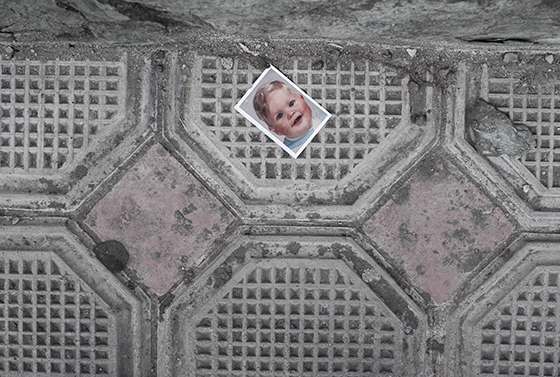 Because I am creative, poems arise from what is garbage to others. One day I was walking on the stone sidewalks of Cuenca, Ecuador. I often look down at the patterns and crevices of the walkways as I sojourn. Something stopped me. A picture had fallen face up onto the grimy patterned  stonework. It was a family portrait of a boy. I noticed how the smiling, lovely face was vulnerable on the dirty sidewalk where it would be stepped on. Why did the scene attract me to take a photograph? Most people would ignore it. I found the incongruity evoked pathos in me. I reflected upon what happens to people in life. The purity of their beginnings fall to earth. At early stages innocence suffers degradation, injury, abandonment, death. Yet the smile and light is in the picture.