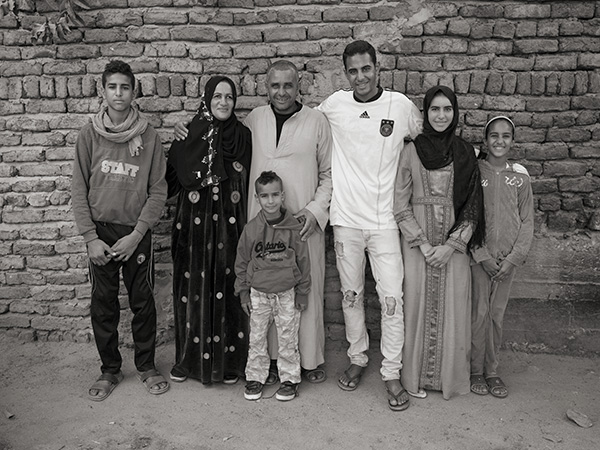 Amira seemed timid and mysterious during my first visits to her home in Luxor several years ago. After all, I was a stranger from America who did not share her Egyptian life or speak her language. What might I be thinking of her poor, humble earth home and impoverished family? Her father, Hagag, and I were becoming friends. Each day I walked on the dusty dirt road along the Nile River to be with him, his wife Edleah and five children.


Bilal, the youngest, age 3, often ran around with nothing on but a t-shirt. He sparkled like a gem—full of happy exuberance, whether playing with cats, racing about the compound, or being at my side. His mother was amused when he scolded her to go away so that he could have me for himself as playmate.

Mohammed, the oldest son, took me on a sojourn to a nearby village. I sat atop the family donkey while he walked beside. He spoke enough English to allow us to converse. Amira had just reached the age to cover her head with a scarf. She could only glance at me shyly in passing. Nubi, the next oldest boy seemed shy and aloof. Iyah, the youngest girl was bubbly and playful, her reddish-brown curly hair pulled back and tied behind her head. She looked curiously at me while smiling in delight.

I came to know and love the entire family, and the grandmother too.

Three years later, last December, I arrived again in Luxor and stayed for three weeks. Mohammed had gone into the army. He could not avoid it since the family had no money for college. He returned home for a week while I visited. In the army he earns one dollar per day and must pay for his uniform and shoes. The family cannot afford it, but pays for his bus trips home and back to his army post. He only has a few months of his two year service left. After that he said, “I want to work and help my family.”


My time in Luxor was split between my friend Hagag’s family and my other Egyptian friend Abul’ Ezz and his big family. Hagag is poorer than Ezz, but by American standards they both are quite poor. Yet such heart in these people! I feel humble in their presence.


Hagag is a farmer with a tiny plot of greens. He has a bad back that needs surgery but labors on. The children have grown and with this visit opened up to me. Bilal wanted to be sure he was not asleep if I were coming. Iyah made drawings—including my portrait. Nubi gave me rides on the donkey cart if I was going on to Ezz’s home. Amira stopped her studies to look deeply into my eyes and speak a little in English.
I always had my camera and the families accepted my picture taking.

Amira is coming of age, finishing secondary school. She is bright, honest and pure hearted. Her hope is to attend college and study business or accounting. But it is impossible for the family to afford.

All four children sleep in one small room. Amira’s bed is a straw mat spread upon the hard earth floor. The others sleep togerther on cushions on simple divans. Perhaps Amira sleeps on the earth because of her age—because she is a young woman. There is no complaint in her. 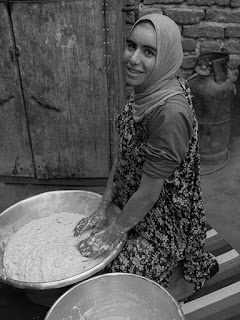 I told Amira I would be sure she can go to college. Her heart soared and it was as if a thousand candles lit within her breast. Such a smile of gratitude. I imagine her at college, ardent in her studies, sharing a room with another student, and with a bed to sleep in.