I knew that I would become very lazy in Hawaii. Sure enough, within a few days of balmy, hot air, salty humidity, crashing waves, immense ocean all around, chirping birds, insects, myriad flowers amidst lush vegetation—all my ambition to work sort of slipped away. 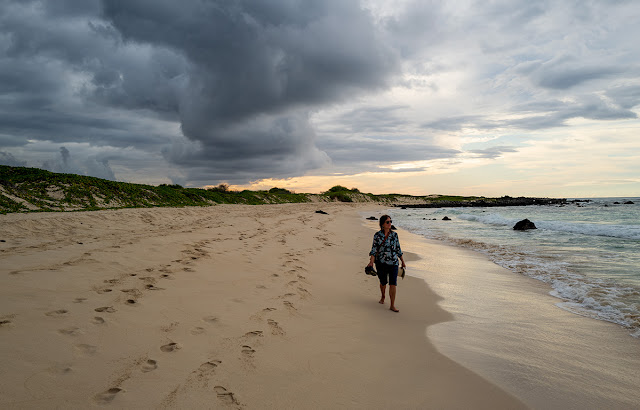 I have managed to make a couple paintings, write, and take plenty of photos.

It is very pleasurable to be with Amy as she experiences Hawaii for the first time. She appreciates the magnificent ocean from the shore, just getting her feet wet on the beaches and maybe splashing in the shallow waves. Amy almost drowned twice in her life and does not swim. 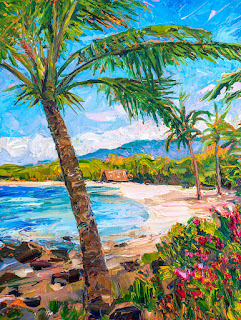 I swim, but the Big Island is mostly rocky coast. Nonetheless a few very good beaches are to be found and I have relished the water and surf. Both of us have had bloody gashes from slipping and cutting our hands on rocks. I was surprised at how quickly mine healed. I had thought I might need stitches. Salt water speeds healing of wounds.

We explored the Kona region for nine days. That is the middle of the western coast and relatively dry. The best beaches are on this side. Now we are at the far north of the island, staying in a cottage on a small farm by the town of Hawi. We will be here for five days and then follow the eastern coast south to Hilo—the rainiest city in all of America. 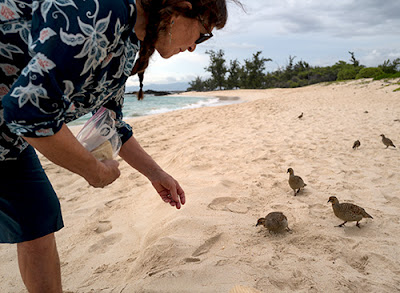 Amy is passionately involved in culture and all things native. We went to an international Hula competition at the Marriott Waikoloa Resort along the coast between Kona and Hawi. I was surprised how many Japanese were present. It seems hula dancing is very popular in Japan. About a third of the groups performing were from there.
The ladies in the audience wore corsages of fresh exotic flowers pinned in their hair. A woman sat next to me and I was intoxicated with the scent of gardenia, plumeria and ginger.


"Hula is a dance that is completely unique to Hawai’i. Although in these modern days it is often performed to entertain, in ancient times hula played a critical role: to preserve and perpetuate the stories, history, culture, and traditions of Hawai’i. A hula dancer visually conveys the meaning or story behind a particular chant or song." See more: Hula

Posted by Steve at Monday, November 11, 2019
Email ThisBlogThis!Share to TwitterShare to FacebookShare to Pinterest