At the corner of a public parking lot on Water Street, adjacent to an expensive downtown hotel is a small stone fountain with patio and stone benches. It is where vagabonds hang out. The parking lot offers public toilets. I have passed by the motley congregation many times because my little gallery is in a building nearby. They don’t harm anyone, but sometimes show signs of mental instability—talking to themselves or shouting. They are disheveled, unkempt—mostly men, but sometimes females are in the midst.

It would be easy to write this band off as vagrants and ne’er-do-wells. But something remarkable happened not long ago that confirmed the fact that we cannot judge people. 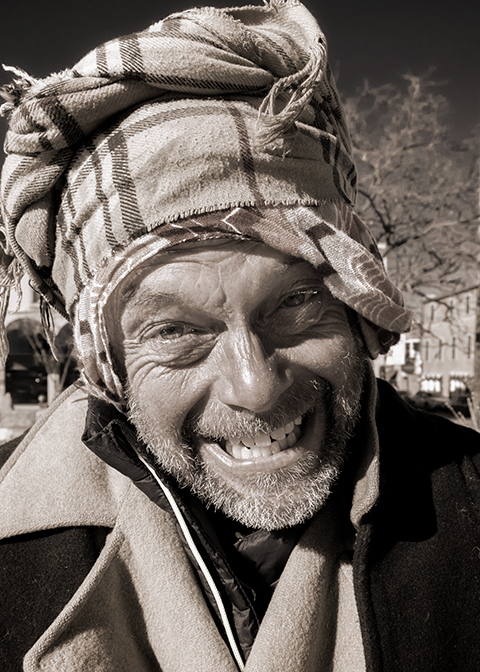 The circumstances involved my wife Amy. She said, “I work downtown, but park at the free Capitol lot and walk the blocks to the Plaza. I was schlepping several items and as I approached Water St. Parking lot, I set my bags down to rearrange them for easier carrying. I was running late . About an hour later, I wanted to make a phone call , but discovered my purse was NOT anywhere in my possession. I had gone to the bank prior to coming downtown and had taken out 600.00 to purchase tires for my car. My wallet contained all my credit cards and I.D. ...I was horrified. I ran outside to Water St. near the lot—the last place I recalled seeing my purse. I realized the odds of it lying there were 0 to none. Three homeless men were sitting near the area. At first glance, my heart sank. I asked them if they had seen a blue purse, which I may have left near the place where they were seated? "Why yes, we took it to the shop across the street for safe-keeping." I ran into the shop, and after a brief Q and A from the clerk, I had my purse back! Not one cent was touched. All cards and ID were there. The phone, too. I crossed the street and gave them each some cash in thanks. One replied, " People don't acknowledge us as human, when actually...We are gentlemen.”

I spoke with two of the fellows, Leaton, in the picture above, and Robert who said he found the purse. "I was startled seeing all the 100 dollar bills! I am not interested in a reward or recognition."

There is love abiding in these beings, though it may not be apparent at first glance.

"…consideration shown to the poor is one of the greatest teachings of God."

"Join yourselves to those who work for the poor, the weak and the unfortunate; this is greatly to be commended." – Abdu’l-Baha

Leaton is a beautiful human being. I've talked to him many times on the Plaza where he is a regular. A man with lots of swagger and style also. This picture is great, I'll use it for reference for a future portrait of him.

ensO said...
This comment has been removed by the author.
5:57 PM