Have The Life That Is Waiting

The cave you fear to enter holds the treasure you seek. ― Joseph Campbell 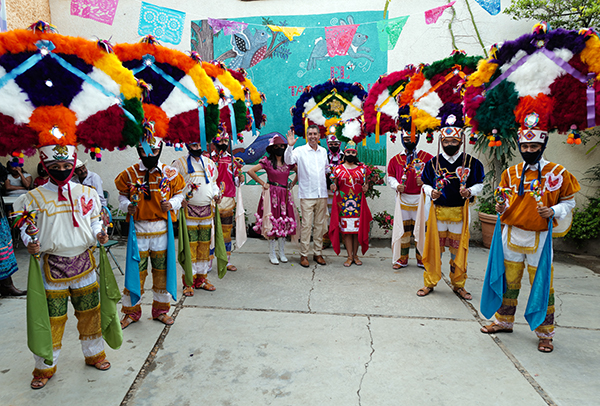 Outside my back door is a small shady glade with canna lilies ten feet tall. They are always blooming. The place is so magical that it instantly claims my sense of place and time. When I arrive there, no matter what I’ve been thinking or doing, I am transported to the “here and now”. 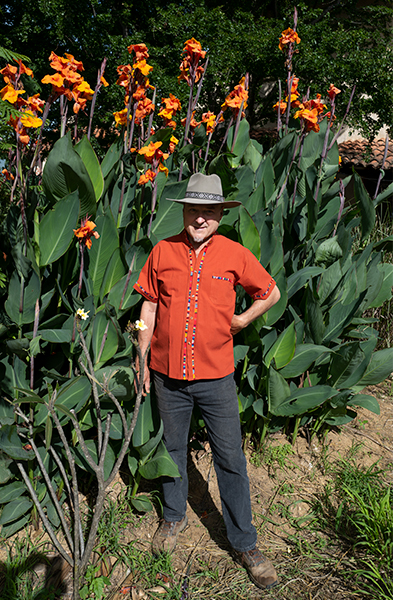 I am living with the earth. Every day roaming on the property, planting, pulling weeds, tending, cutting grass, observing. Secretly, I think I have wanted to do this for a long time but was not in the right place and time of life. Even so, today I confided to Amy that I feared losing my creative edge; after all, I am an artist. “Don’t worry,” she said, “ that won’t happen.”
For the time being, photography has taken precedence over painting. This has happened in the past particularly when I have been traveling extensively. Being out and about exploring, it is easy to have my camera at hand. My artistic eye for subject matter and composition guides my hand. 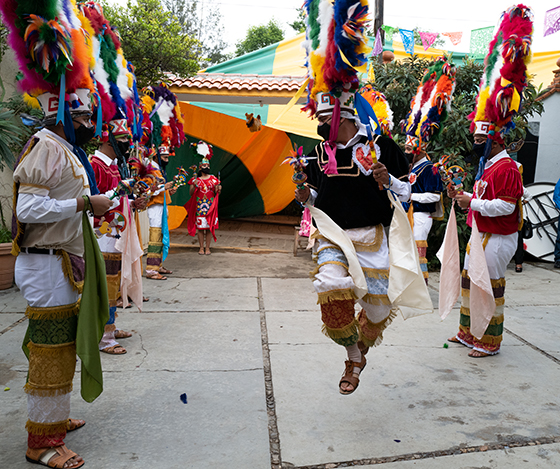 Meanwhile, adventures continue. We went to a birthday party with food, drink, orchestra and forty dancers in traditional costumes. And as a backdrop to the events were wall murals painted by art students that copied Amy’s illustrations from the book Dreamcarver.

We took a hike with a group that explored the ancient ruins of Dainzú, a Zapotec archaeological site first occupied 700-600 BC. Then sauntered through fields of agave (used to produce mezcal spirits—takes about twenty years before the plants are ready) until we reached a village, San Jerónimo Tlacochahuaya, that is home to a gem of a church. The construction of this work dates from the middle of the 16th century and its creators were Dominican friars. We could not go inside, but the doors were open and let enough light in that I could stand and marvel at the wall and ceiling decorations and sacred paintings and sculptures.

Our Mexican friends Mayolo and Marta went with us to the village of Tlacolula de Matamoros which has a thriving Sunday market that we wandered through. I bought a watering can hand made from tin, some herbal medicine and sundries, while Amy bought handmade aprons and some organic foods to take home. We visited the village church: the spectacular Capilla del Señor de Tlacolula (16th century), also known as the Chapel of the Martyrs. It is completely covered with polychrome stucco and mirrors, and contains a series of statues of the most macabre martyrs (crucified, beheaded, stabbed, with an ax to the head ...). Precious wrought iron gates stand amid the baroque interior.

No sooner had we begun the forty-five minute drive back to Oaxaca than we encountered stalled traffic on the highway. Mayolo got out and hiked to a police car only to find that protestors had closed the highway. This is the second time Amy and I have had the bad luck to encounter such civil disobedience.
It would be a three hour wait! We turned around and went to Mitla, a nearby town famous for an archaeological zone—one of the most important in the state of Oaxaca . It was inhabited by the Zapotecs after the fall of Monte Albán and later occupied by the Mixtecs. In this archaeological zone, the mosaic frets stand out, as well as the presence of thousands of carved pieces. “Mitla comes from Mictlan, a word of Nahuatl origin that means 'place of the dead’, and in Zapotec it is known as Liobaa, “house of tombs”. At the fall of Monte Albán, around AD 750, Mitla was one of the cities in which the political and religious power of the Zapotecs of the Central Valleys was concentrated until the arrival of the Spanish. “ —Arqueologiamexicana

At last, we headed home, this time without delay.

We must be willing to let go of the life we planned so as to have the life that is waiting for us. ― Joseph Campbell