FRIDAY, JANUARY 12
Our bodies store memories. While swimming on Wednesday afternoon, I had not gone far when I felt as if floundering. Staying in my lane was difficult and I felt lost, in another world, one without boundaries. Feeling something was wrong with my routine, I stopped early. Although I have not been sick in eight years, I wondered if I was falling ill. I fantasized I had a brain tumor. Driving home, any bright light zinged my brain, and I fought off a headache. At home, weakness forced me to rest in bed. After a half hour, my stubbornness got me up to go out for dinner, and then join the figure drawing group I attend weekly.
Thursday, when I woke I felt the same rolling waves of unreality and dreaminess, tinged with remorse and loss. It is my daughter Naomi’s birthday, January 11. If she were alive, she would be 27. Even though I feel I have become more adjusted to her death at nineteen, I realize just how little control I have over the profound influence and effect her dying has had on my life. At the cemetery, while I stood in the snow at her grave, her spirit came, more expansive and loving than ever. She expects me to be happy, and shown brightly in my mind the promise of a joyous future.
Today, normality for the most part returned, and I wonder at my “episode ” which I mistook for illness.
The picture here is of Naomi when she was fifteen, two years before her diagnosis of cancer, and four years before her death.
For more, go to: A Heart Traced in Sand 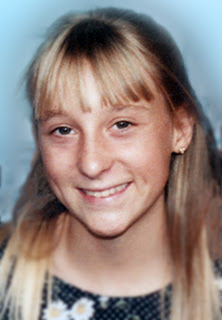 Posted by Steve at Friday, January 12, 2007
Email ThisBlogThis!Share to TwitterShare to FacebookShare to Pinterest