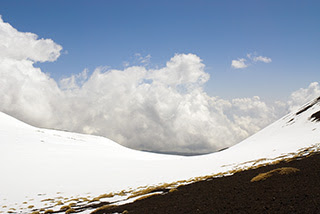 MARCH 27
Sometimes my plans collapse as conditions dictate, then other forces come to play and bring possibilities. Today, I anticipated painting early. As I drove with my supplies on the narrow roads through tiny towns, it seemed I was not finding what I wanted, so I kept driving. Soon I was at a town called Zafferana, written about in a travel guide, and stopped at a nice plaza with a baroque styled church as the centerpiece. Going into the church, I was surprised to be the only one within the soaring and ornately decorated interior. Sitting down in a pew, I meditated in the silence, and said prayers. The weather had become colder and grayer going inland into the mountains, making me unsettled and frustrated about painting. The time alone praying refreshed me. Still not knowing exactly where I was going, I drove in the direction of a sign marked Etna. At this point, I gave up my plans so that a bigger force could operate—which took me up into the snow packed south base station of Mt. Etna, the volcano. Driving, I felt a bit doomed to be in cold, drifting layers of fog that obscured the views. Something kept pulling me forward and eventually the road broke through the clouds near the top, into dazzling light. The snow, brilliant white, made an incredible contrast with black lava rock, exposed in places by wind and sun. As I started walking upward, I thought, “how did I get here, and now that I am lost in this foreign landscape, how is it that I am now found?” 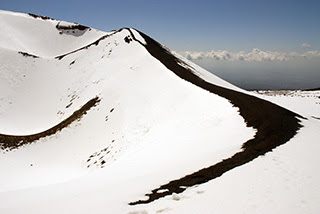 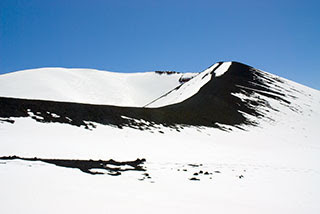 Posted by Steve at Tuesday, March 27, 2007
Email ThisBlogThis!Share to TwitterShare to FacebookShare to Pinterest