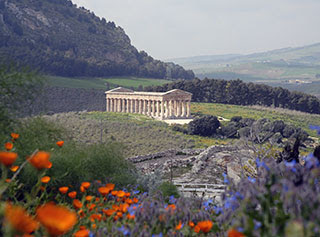 MONDAY, MARCH 19
I almost cried when I found the temple at Segesta after being lost, despairing it was not easier to find. After driving over flat land, the terrain became mountainous, and the hillsides, covered with vineyards, orchards, and masses of flowers was totally distracting. Signs indicated it was not far, then, making a curve on a tree lined drive, suddenly it loomed straight ahead above me. It was if I had found the mystical ship, an ancient vessel set to give me passage into a misty past. Nothing in my American existence could have prepared me for stepping so far back in human civilization. Part of the potency of the immediate impression is the size and beauty of proportion of the temple. It seems a miracle.
The theater, built two centuries later in 3 BC atop a nearby mountain, looks out above the temple site. The row of seats form a steeply inclined semi-circle, viewing the central stage area, with an incredible view over the far reaching landscape behind. It is as if sitting at the throne of the Gods.
In places like Erice and Segesta, it occurs that the ancients, chose not to build in places merely from convenience, but more importantly, for power. 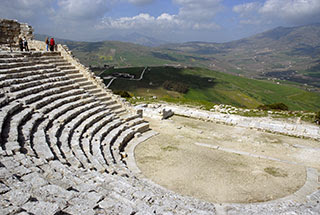 Posted by Steve at Tuesday, March 20, 2007
Email ThisBlogThis!Share to TwitterShare to FacebookShare to Pinterest