Flux Of The Street 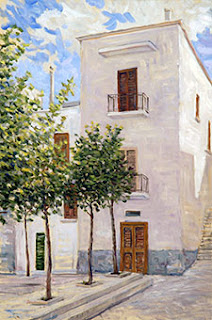 Polignano, Italy
He appeared with two friends and stood nearby, watching me paint. His friends interest soon waned and they caroused off, but he stayed close by. I continued at my easel, painting a tall narrow house, rising from the foot of a small public square, with a few trees in the foreground. The afternoon light illumined the surroundings under a cloudless sky. He watched in silence only a couple feet away, studying my every move from over my shoulder. After awhile, I felt something unusual was occurring. Breaking the silence, I asked him a couple questions, and learned he was eighteen, liked skateboarding, did a little artwork and originally came from Romania, where he began school late, at eight years old. His handsome look was of the sensitive type. I painted, and noticed feeling slightly uncomfortable at moments, being that my activity was so closely observed without falter and in silence. Other friends arrived, watching, then leaving to play soccer in the streets. The lad’s mother strolled along, spoke in English then disappeared. He did not leave my side, standing motionless for what seemed like an endless sojourn. I felt him become an extension of my being, and was embarrassed if I made a mistake and had to correct myself. Late in the afternoon, he said, “I have to go now.” We smiled, said “ciao,” then he vanished.

I remember him, and I am sure he too remembers me—and our chance encounter in the flux of the street.
Posted by Steve at Thursday, April 19, 2007
Email ThisBlogThis!Share to TwitterShare to FacebookShare to Pinterest
Labels: creativity, oil painting, street art