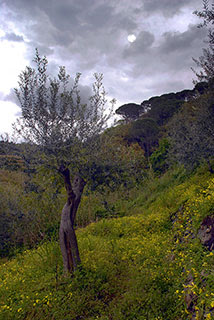 THURSDAY, APRIL 5
This morning I walked along the sea wall to the coffee bar by the tiny harbor. Cappucino is served in a little ceramic cup with a froth of white milk on top. Standing at the counter, I finished it in five minutes. Working men came to the bar, usually ordering espresso’s that are served in even smaller cups. A drink of water is offered first, to wet the mouth, then the espresso goes down in two satisfying sips.

Arriving back at the apartment, the produce man was sitting in his truck out front. I picked out a zuccini squash, but did not need anything more. As I began to pay, he put the squash in my hand, spread his feet, faced me squarely and touched both my shoulders. Then, with a look that said, “ this grand acquisition of your's is not going to make me rich,” he waved me off, touching his fingers to his lips and kissing off, as if to say, “ it is yours, and bon apetito.” It was a bit of a joke for both of us, and I laughed, saying grazie as he climbed back in his truck.
Yesterday I went to Messina in search of the Museo Regionale where a couple of Caravaggio paintings are on exhibit. The drive took 45 minutes to the city limit, then, I had to squirm in traffic snarl. Arriving at the museum, it was chiuso, closed for the day. I thought, this is part of the 15% chaos to be expected along the way. Nonetheless, I did not like having come so far to be denied. Furthermore, the sky was cloudy and occasionally spitting raindrops. Traffic was bad, the streets noisy and not particularly interesting, and I felt I was not accomplishing anything. Frustration grew, and then, serendipitously, I felt a spirit touch me. In the next moment, fresh air flowed into my lungs and with each drink of breath I felt more relaxed and rejuvenated. Grace had come. Standing near a busy market, with the wet, rubbish-strewn street at my feet, an old vine tied to a fence caught my eye. A wisteria was blooming, with pale purple flowers in delicate masses spreading along the railing. The moment I leaned forward to look more closely, I found an incredible fragrance permeated the air. Just the contrast of circumstances was wonderful in itself. In the midst of feeling denied, a reminder of renewal and beautiful life. Grace works without effort.
Posted by Steve at Friday, April 06, 2007
Email ThisBlogThis!Share to TwitterShare to FacebookShare to Pinterest
Labels: Caravaggio, Espresso, Grace, Messina, Sicily