Play From The Heart 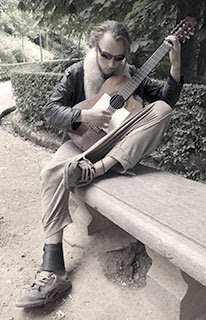 May 22,
“You will like it here,” Pepa said with a big smile as I got out of the car at Plaza Nuevo in the old, medieval quarter of Granada. As we exchanged goodbyes, her eyes brimmed with laughter, and then she sped away.
Left alone on the street I soon found a room to put down my backpack, and went out walking, curious to see an important Spanish metropolis. It is cosmopolitan, but homespun, with fewer of the grand buildings and monuments of cities like Paris, or even a similar sized Italian city like Florence. Nonetheless, the bohemian atmosphere captures my imagination and I can understand how Spain has bred many great artists. The celebrated dramatist, Federico Garcia Lorca (1898 – 1936) came from Granada, and also was murdered here by fascist supporters. I have never seen a city so marked by graffiti. It is everywhere, and although some might find it repulsive, I look at the artistic, (if delinquent) merit, and the vibrant, primal qualities of line, color and subject. It adds a psychological twist to a place that is known for attracting students, intellectuals and artists.
Along a tree-shaded walk by La Alhambra, the famous city of Sultans and Kings that is now part of Granada in the old quarter, a young gypsy fellow caught my eye. He sat on a bench, strumming his guitar, with his brown dog at his feet. Both appeared ragged, and the youth had a hardened look, wearing sunglasses that hid most of his face. His long greasy hair, his scraggly, thin beard, and dirty fingernails, told me he lived on the street. Yet, to let it be known that an aristocrat lived behind the veneer of a vagabond, he wore a coat with fox fur collar. It was open in front down to the navel, revealing his bare chest. I slowed my walk and took a picture, then approached to ask if I could take more. He spoke in accented but quite understandable English, and replied, “it will cost you.” I had no coins, and pulled my pockets inside out to show him.
“Then you can’t take pictures.”
Sitting down on the end of the bench, I said, “You are playing your music for free.”
“Yes, well this is my life. “
“And you play from the heart.” I observed.
He resumed strumming flamenco chords. I quickly fell under the spell of the pure sound from his beat-up, old guitar. As I listened, a full, strong feeling grew inside. Looking around, I wondered at the people walking by, tourists who did not slow down, but cast furtive, passing glances our way. He began singing a soulful flamenco song.
“What was that?” I asked when he finished.
“Lagrimas Negras, (Black Tears) from the CD Bebo & Cigala, and he wrote down the words so I could buy the CD.
As we talked about his life, and a little about mine, I understood how he unequivocally lived a gypsy life—without illusion of what he was missing in exchange. A bit of sadness was in his philosophic attitude about the sufferings he bore and how it cut short his relationships, for he could not offer anyone much more than his song. Reaching in my wallet, I found a five euro note for him. He barely touched it, but gently pulled it to his side of the bench. Brightening up, he said, “Now you can take as many pictures as you want.”
I never saw his eyes behind his sunglasses when we exchanged hearty handshakes goodbye. As he took up his guitar again and I began walking away, I imagined there was a hint of the same laughter that was in Pepa’s eyes when she dropped me off in Granada.
Posted by Steve at Tuesday, May 22, 2007
Email ThisBlogThis!Share to TwitterShare to FacebookShare to Pinterest