The World Is One Country 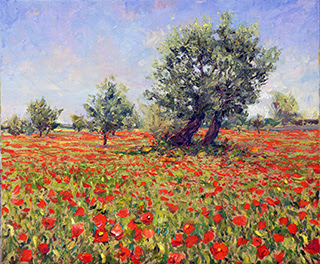 Europe has come home with me to the United States. Friendships forged in Italy, Spain and France, continue here. I lost weight on my travels, and now I eat less and ride a bike. Some of my attitudes have changed, and I see more clearly how all people and nations are interdependent. Baha’u’llah, spoke over a century ago, saying, “The world is one country, and mankind its citizens.” He also said, “It is not his to boast who loveth his country, but it is his who loveth the world.”
I took many pictures while traveling. The painting above is from a photograph I took in Puglia, Italy. To see more, go to the Steven Boone website.
Posted by Steve at Thursday, June 21, 2007
Email ThisBlogThis!Share to TwitterShare to FacebookShare to Pinterest

Hi Steve,
I've been following along on your journey. WONDERFUL! Great photos and art work. Thanks for sharing.
Love,
Mary-Lela