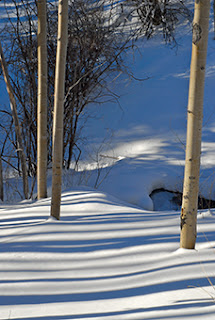 The snow fell for hours, covering everything in a blanket of white. For years, I have wanted to snowshoe in the mountains after a snowfall. Yesterday, the sun shone in a cloudless sky and I called my daughter Sarah to come with me to hike. After renting snowshoes along with poles, we drove toward the Santa Fe Ski basin, which is the second highest ski area in the USA, at about 12,500 feet (3,810 meters). Just short of the basin, we pulled over to a trail where other cars were parked, and got out. I felt totally exhilarated. The sun shone on the snow, which leapt with dazzling diamonds of light. Deep greens of fir limbs peeked out from clouds of white, while stands of aspen trees rose in clusters to touch the turquoise blue sky. I walked over to public outhouse by the parking lot and as I entered, I felt Naomi with me. Her presence is unmistakable, and she conveyed happiness. “Oh, how I wish you could be with us and see all this,” I thought. Immediately, I felt her compassion, and I realized how free she is in her own world of wonder. Then, as I stood in the dank, darkened space, smelled the odors, and looked at the soiled toilet seat, I thought to myself, “She is intact, and feels no cold and does not suffer from heat . . . by God’s grace her needs are all satisfied and she is free from struggle. Furthermore, she is in space without boundary—an eternal being basking in pure light.”
As Sarah and I hiked she soon became breathless because she has been out of Santa Fe for so long and the altitude holds less oxygen. Stopping occasionally, the silence added to the magic of the setting. I snapped pictures and felt glad and also a tinge of remorse, knowing soon I will be in other places world's away from this one.
My plans for leaving continue to progress. February 1, 2008, I will go to Santa Barbara to see my parents for a week, and then fly to Belize to relax and begin my wandering. I desire to live among black people. My vaccinations begin this week; if a mosquito carrying the Dengue fever pathogen bites me, I don’t want my legs to fall off. Malaria is another danger I might face as I go into Africa. There are travel warnings for places that I want to go, including Israel, but I intend to visit the Baha’i World Center in Haifa anyway. 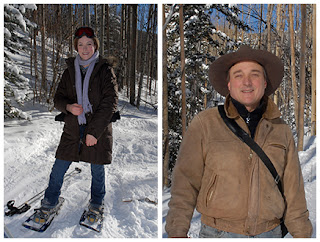 Happy Holidays to everyone!
Posted by Steve at Sunday, December 23, 2007
Email ThisBlogThis!Share to TwitterShare to FacebookShare to Pinterest