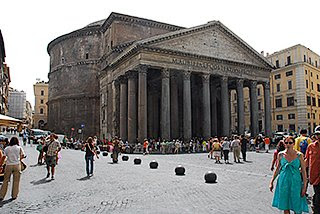 Rome is called “The Eternal City”, and there is a saying that “all roads lead to Rome.” These days, routes through the air bring travelers here and this is how I arrived from Paris. The weather is warm enough that I sweat during the day and cannot have any covering in bed at night. My apartment is within walking distance to St. Peter’s Cathedral and the Vatican. There is so much to see and immediately I went into the streets with my camera to get a dose of Roman life.

This is not my first time to Rome and yet, I  had the same experience of sudden awe and swooning when, as I turned a corner in the maze of downtown streets, I glimpsed the Parthenon, looking too big for its surroundings, nestled in a small plaza among newer buildings. It cannot be seen from afar. When suddenly, I turned a corner and arrived, it was like finding the lost ark—the presence of something different, special, and of major proportions; an important architectural antiquity over 2,000 years old in it’s original form. I had a similar experience at the Colosseum, but it stands next to the Roman Forum, towers over the neighborhood, and can be seen from afar, so the surprise is different.

Even though Rome is old, it is also trendy and stylish. I was amazed when I arrived out of the Metro at the Spanish Steps on Via Condotti and saw the luxury designer clothing boutiques lining each side of the street. Names like: Valentino, Gucci, Giorgio Armani, Prado, and Ferragamo. I saw my reflection in the windows of haute couture shops and felt almost embarrassed seeing myself dressed in blue jean shorts, safari hat and sandals. But then I thought, I am an artist and getting down and dirty on the streets . . . not trying to impress anyone with my looks (at the moment anyway.)

I have sixteen days in the “Eternal City” before leaving for Tanzania. 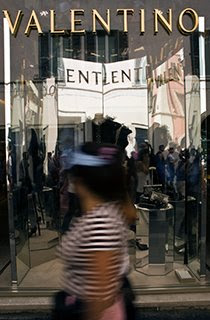 Posted by Steve at Sunday, September 07, 2008
Email ThisBlogThis!Share to TwitterShare to FacebookShare to Pinterest