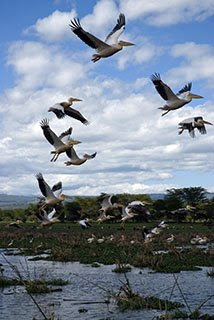 The people of Kenya have a particular fondness for Barak Obama, whose father hails from this nation. Recently the author Jerome Corsi wrote a book caled “The Obama Nation,” with the intent of casting doubt on Obama’s character and ability. He had the nerve to arrive in Kenya to promote it, but got no further than the airport in Nairobi before being roundly booted back out of the country, amid great publicity and outrage. During my safari, some of the travelers who were on the Kenyan portion before I joined, recounted how a group of Masai children had arrived at the Safari vehicle chanting USA! USA! Obama! Obama! Obama!

Charity and I took a nice trip to Lake Navashu, about an hour from Nairobi. A boatsman took me out on the lake, past flocks of pelican, and to my surprise, hippo were swimming in the deep water. They swim all day for hours on end . . . incredible for such big animals.

During my last week in Kenya, my bonds of friendship with people deepened and by the time I had to leave, while I packed my suitcases, my heart ached a bit. I was touched at how many times I heard someone ask, “When will you come back to Kenya?”
My flight from Nairobi, Friday, October 10, takes me to Doha, Qatar, where I transfer airplanes and arrive in New Delhi, India at 3:30 AM Saturday.

Over 16 million people live in New Delhi, and about a sixth of the world’s population lives in India. My first day I am tired from traveling all night and into the early morning hours, but go in the afternoon for a taxi ride and arrive at the Baha’i Temple, fondly called the lotus temple because of its shape in the form of an opening lotus petal. The drive is boisterous through the crowded streets, with no rules applying in the road except get there as fast as you can without hitting anyone. This means squeezing through traffic snarls and constantly honking the horn to alert others of your position. By the time I catch a glimpse of the temple dome in the distance, I feel uplifted as if touched by a vision of the sublime. I learn that it is the most visited site in India, and when I am there, a constant flow of people makes it obvious why. “Since its inauguration to public worship in December 1986, the Bahai House of Worship has drawn to its portals more than 50 million visitors, making it the most visited edifice in the world. People have come regardless of the scorching summer heat of Delhi, which sometimes rises above 40°C during the months of June to September, and have braced the chill and cold rains that Delhi experiences during winter. They have admired the beautiful lotus form of the Temple, and have been fascinated by the teachings of the Bahai Faith, which believes in oneness of God, oneness of religions and oneness of mankind.” From Pilgramage-India.com 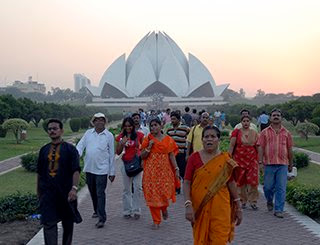 Today, I leave for the Himalayan region in the north and I will live on a houseboat.
Posted by Steve at Saturday, October 11, 2008
Email ThisBlogThis!Share to TwitterShare to FacebookShare to Pinterest
Labels: "The Obama Nation", Baha'i Temple India, Barak Obama, India, Kenya, New Delhi, Safari

I am enjoying your journal so much especially the accounts of Africa and India. The Bahai temple is beautiful. If you get a chance to go to Amritsar you'll be astonished at the beauty of the Golden Temple which is the Sikhs most cherished temple.