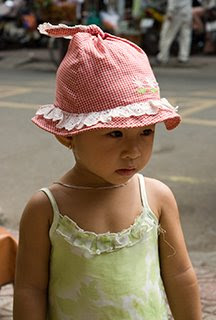 The day I left Thailand, its high court decided to make the prime minister step down, and banned him and his cronies from politics for five years. This is what the 50,000 protestors occupying the Bangkok airport wanted, and they celebrated, announcing the re-opening of normal activities. Meanwhile, I negotiated through the troublesome situation and managed to arrive in Ho Chi Minh City (formerly Saigon), only a day late.
Immediately I began finding friends. The evening I arrived, two young security guards at my hotel caught sight of me in my safari hat and one called out to me with a big smile, saying “hey cowboy!” They beckoned me to sit between them and one put his hand on my knee while the other massaged my back and we talked. The next day I found myself on a motorcycle behind Hang, a woman who sells handmade items in street markets. THE DREAM brought us together to become friends. She has acted as my agent while I bought lacquered boxes, silk clothing and carved wooden objects for resale in the USA. Since then, we have spent hours each day together, shared meals, gone dancing several times and one day, she posed in traditional Vietnamese silk dresses while I photographed.
People for the most part are eager for contact, and at least in the cities, speak some English. Many people are street vendors or tourist industry employees and must communicate, at least enough to say, “Hey mister, what are you looking for?” Mostly, street stalls are worked by women and often the younger ones are quite forward. I have had my arm grabbed and been pulled into stalls by smiling ladies who want me to buy something or other. 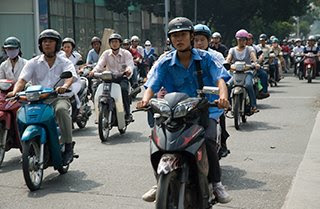 Vietnam is one of the few socialistic nations on earth but you would not know it. A raging free market thrives everywhere. The Viatnamese currency is in dong. One dollar is worth 16,750 dong. So, at an atm machine I can be dispensed two milion dong at once. It is tricky, especialy since I do not see perfectly well without reading glasses, and several times I have given over a big note, not reading all the zero's. In a restaurant, when the bill was 40,000 dong, I gave a 500,000 dong note, thinking it was 50,000. Fortunately, the correct change came back, but I was surprised. This has happened more than once and now I am very careful.
It seems there is no lack of commerce or business. I have never been anywhere that had so many motorcycles in the streets. Actually, it is good since fuel is saved and streets are less crowded with cars.
My brother Wade lives in the Washington DC area with his Vietnamese wife of three years, Huong, and their one year old son. Today I am going from Saigon to Nha Trang, a city of 500,000, famous for beautiful beaches on a gorgeous bay. I will visit with Huong’s family, especially Trinh, a young woman who speaks fluent English.
I need to extend my visa which expires December 19. Vietnam is full of beauty and adventure, and I want more time here. Places in the north, like Hanoi, Hoi An, Halong Bay and Saba beckon. 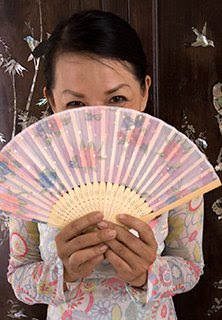