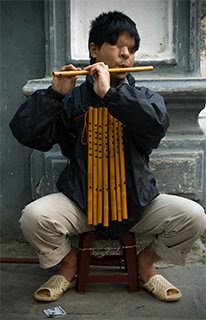 THE DREAM is my home and I am content in it. Wherever I am in the world THE DREAM is providing me all I need. I have no longing for a physical home, and the fewer possessions I have the more freedom I feel. In a Kris Kristofferson song called Me and Bobby McGee, the blues singer Janis Joplin sang, “Freedom's just another word for nothing left to lose.” It is profound to have nothing to lose, since then, there is everything to gain. On the other hand, the more possessions a person has, the more they risk losing. This causes a certain amount of fear. I am aware that since I began buying goods in India, Thailand and Vietnam, I have felt less free. Now, there are loans to repay, and I often feel responsibility for all the items—their safe arrival in the USA, storage, and eventual sale and repaying of debt. I feel obliged to return to Santa Fe soon, and so I have ticket on January 15 from Auckland, New Zealand to Santa Barbara, California where my parents live. By January 20 I will be in Santa Fe. Certainly, THE DREAM will not end with my traveling, since it is the fabric of my consciousness.

The International Baha’i conference in Kuala Lumpur, Malaysia included communities from Korea, Singapore, Myanmar, and Malaysia. The main language was English, with translations in Malaysian, Timor and Mandarin. About 3000 people attended, and the main focus of the gathering was discussing the progress of consolidating, and teaching the Baha’i Faith to the greater world at large.

Tomorrow, I leave for Australia. I will arrive at Gold Coast, an area famous for it’s fine beaches and upscale development. On January 4, I fly to Auckland, New Zealand, my last country before I return to the USA on January 15. I say “home”, but really, THE DREAM is my home. 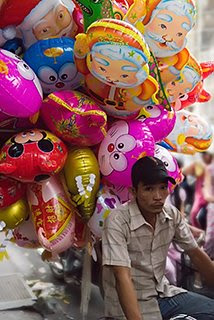 More than ever before, I feel the truth of Baha’u’llah's words: “The world is one country, and mankind is its citizens.” Ábdúl Bahá said, “Wars are caused by purely imaginary racial differences; for humanity is one kind, one race and progeny inhabiting the same globe. In the creative plan there is no racial distinction and separation such as Frenchman, Englishman, American, German, Italian or Spaniard; all belong to one household. These boundaries and distinctions are human and artificial, not natural and original. All mankind are the fruits of one tree, flowers of the same garden, waves of one sea. In the animal kingdom no such distinction and separation are observed. The sheep of the East and the sheep of the West would associate peacefully. The oriental flock would not look surprised as if saying, "These are sheep of the Occident; they do not belong to our country." All would gather in harmony and enjoy the same pasture without evidence of local or racial distinction. The birds of different countries mingle in friendliness. We find these virtues in the animal kingdom. Shall man deprive himself of these virtues? Man is endowed with superior reasoning power and the faculty of perception; he is the manifestation of divine bestowals. Shall racial ideas prevail and obscure the creative purpose of unity in his kingdom? Shall he say, "I am a German," "I am a Frenchman," or an "Englishman" and declare war because of this imaginary and human distinction? God forbid! This earth is one household and the nativity of all humanity; therefore the human race should ignore distinctions and boundaries which are artificial and conducive to disagreement and hostility. We have come from the East. Praise be to God! we find this continent prosperous, the climate salubrious and delightful, the inhabitants genial and courteous, the government equable and just. Shall we entertain any other thought and feeling than that of love for you? Shall we say, "This is not our native land, therefore everything is objectionable?" This would be gross ignorance to which man must not subject himself. Man is endowed with powers to investigate reality, and the reality is that humanity is one in kind and equal in the creative plan. Therefore false distinctions of race and nativity which are factors and causes of warfare must be abandoned.” Ábdúl Bahá, from Foundations of World Unity