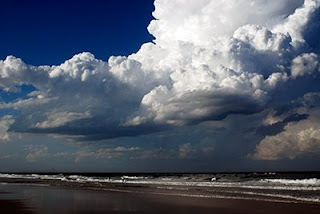 This is the first time in my life that I celebrated New Year day in the middle of summer. For the people living in Australia and the rest of the southern hemisphere of our world, it is summertime. When I arrived, I rented a car at the airport, and set out to find a hotel. Easier said than done! Everywhere along the ocean, from high-rise to motel, the rooms were all taken. It is holiday time and Gold Coast is a premiere beach area, and now is the warmest time of year. After an hour of looking and finding only an oversize room at an exorbitant rate, I said a prayer for assistance, and then pulled into a motel along the ocean, despite the sign out front that said “No Vacancy”. To my surprise, I got a room for five nights at a reasonable rate.
Usually I like to explore surroundings, but now that I am at the ocean on a nice beach, I have been content to stay put, even though I have a car. I have barely gone anywhere, but everyday, walk on the ocean shore and dive into the frothy surf. The experience is captivating and I know why people become “surf bums.” To be at an ocean is to stand at the verge of something huge, primeval, and unfathomable. The sound of waves crashing and rushing onto sand is distinct and unstoppable. To walk into the ocean is to be challenged because it can easily swallow anything that dares venture into it. Waves crash and churn into a froth of tiny, bursting bubbles that buffet and caress, constantly moving.
Today, the surf is fierce compared to yesterday. It rained a little, the sky is overcast, and strong winds encourage bigger waves. I have been one of the few to venture in the water, along with some surfers. Immediately, I felt a strong push and pull, and realized I could easily be sucked out to sea and never heard from again. But the feeling is so magical to be in the swirling, crashing, frothing water, playing in it, feeling the swell and going under, being hit by waves and bursting through, falling and then getting up . . . being washed in salty lather, over and over again.
As usual, I have made friends. The second night here, I went to a Baha’i gathering and of course, felt at home among family. Tonight I am going dancing with a lady I met who owns a café along the beach.
Tomorrow, bright and early, my flight leaves for New Zealand, the last country I will visit on my world tour. There, it is three hours earlier than Australia, so, if I call Santa Fe, New Mexico in the United States at 9 AM (09:00) on Sunday, January 4, it will be 1 PM (13:00) Saturday, January 3.
I have almost completely gone around the world.
Posted by Steve at Saturday, January 03, 2009
Email ThisBlogThis!Share to TwitterShare to FacebookShare to Pinterest
Labels: Australia, Gold Coast, Ocean swimming, Southern Hemisphere