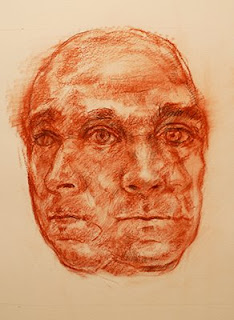 I have always needed openness to feel good. When I feel closed in or surrounded, I tend to get uncomfortable. Certainly there are many people who are my opposite and tend to need the comfort of familiar surroundings, and like being enveloped—and this is the wonder of humanity, that each being is unique and has special qualities all their own.
When I was a young man, I did not want to have a tie around my neck because it felt constricting. The ocean makes me nervous because it can swallow and eat me. There have been times when I have been in groups that demanded my involvement and unconsciously my body rebelled so that I felt nauseous or had to frequent the bathroom.
In work too, I can feel trapped, even by success; in my case, landscape painting. Repeated success combined with financial reward can lead to what I call “Pavlov Dog Syndrome.” Ivan Pavlov, (1849-1936) was a Russian scientist that made his famous discovery that dogs salivate before food reaches their mouths and that they learn by association to salivate even when a lab technician comes into view if they expect that the technician is going to feed them. In Pavlov’s experiment, the technicians always wore white lab coats and the dogs learned that people who wore white lab coats would feed them, so after awhile, they associated white lab coated people with being fed, and just the sight of them would make them salivate. So too, after repeated success selling certain types of artwork, an artist can become conditioned to “being fed” and even salivate at the thought of the food that is to come to his table when he produces more of what people like and will buy. For me, this is claustrophobic because soon it can be like living in an artistic box of limited dimension. Like a prison cell. But some artists say that this cell is actually a finely decorated palace and they are quite comfortable doing what people like and to be paid handsomely.
Lately, I feel unsettled creatively. After being so free, traveling around the world, what am I going to do next? I cannot seem to attach myself, or be attached. I do not want to own anything and do not particularly care if what I have comes or goes. Just the ideas for projects make me restless and I fear being trapped. So this is what THE DREAM is presenting me with now and I am treading lightly, just observing where the flowing water wants to go as it makes its way through the landscape to the sea. Soon enough, the energy will gain strength to carry me into a new unknown.
"Good taste is the enemy of creativity." Pablo Picasso (1881-1973)
Posted by Steve at Sunday, May 10, 2009
Email ThisBlogThis!Share to TwitterShare to FacebookShare to Pinterest
Labels: conditioning, constraint, detachment, flow, freedom, Ivan Pavlov, Pavlov's Dog