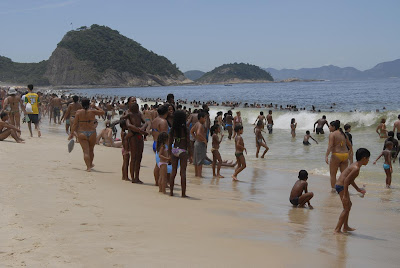 Since setting foot in Brazil, capricious winds have jostled my fortunes. First, after 1 night in Sao Paolo, I returned to the airport for a flight to Rio De Janeiro, but at the ticket counter was told my departure was scheduled from a different airport. I did not have time to catch the plane, so had to buy another ticket and wait hours. I kicked myself because this had happened several years ago in Milan, Italy. Also, my trustworthy Mac laptop that has gone around the world with me, surviving a grueling safari in Tanzania and being dropped on an airport floor, suddenly quit in my Rio hotel. I depend on it for so much, for instance accessing my passwords and important files, processing photos, making travel plans, writing, etc. etc. It is now in a repair shop, but will take a week to get back because of carnival. This forces me to stay in Rio longer than expected.

I could make a book of impressions from my few days here. This city comes at you from many angles, bringing surprises. Right now, it is crowded for carnival. The hotels, and famous beaches-Copacabana and Ipanema are packed. Samba parades and street parties have begun. Friday night I went to a carnival ball  with the theme "Red and Black" at a famous club called Scala. The doors opened at 11PM to allow an international crowd inside. The big band onstage kept up a lively non-stop beat from the beginning and the crowd steadily swelled until the dance floor was packed around 1 AM. The music reached a pitch at 2 AM when dancers and extra percussionists arrived onstage. Only Brazilians can make their bodies quiver in waves from the inside out when they dance. I t has to be seen. I became part of the throbbing, pulsing mix on the floor, dancing with many people, including some transvestites who obviously were having too much fun. When I left at 3AM, the place was still packed and throbbing.

My hotel, located in central downtown, is very clean and modern, with marble floors and courteous staff. But just outside are the grimy, teeming streets, and on Saturday, the contrast became especially clear when the avenues were packed for a party, mostly of Brazilian. I ventured out but did not see tourists. No wonder because it was a drunken brawl. Some of my refined friends would have expired within minutes. The noise of music and revelry was thunderous, with hot, sweating people almost shoulder to shoulder, all talking and shouting at once. Alcohol was being sold in buckets, mostly by individuals selling from their coolers. Sophistication was absent from the event and barely anyone dressed in costume. I pushed through the crowd for a few blocks while tightly clutching my camera, looking to take pictures. The drunken, blind crush made me miserable. Lines of men urinated against the sides of buildings and the air smelled foul. Amazingly, lovers embrace and kissed amidst all this grotesque mayhem, exclaiming their oblivion to misery. Returning to my hotel, I realized vividly the dichotomy of luxury and poverty.
In the afternoon I ventured outside again to pursue my street photography. Strolling into unknown territory away from crowds, I looked for opportunities. Walls covered with painterly graffiti caught my eye, and as I stopped, a boy, perhaps 14 years old, dressed in some carnival attire came up to me to see what I was doing. We struck a friendship immediately and he posed for a few shots and then took some change I gave to him. Further on, I came to a pathetic group of objects spread on cloth placed along the sidewalk. Nobody was there, and I stopped because the chance arrangement of a few things caught my eyes. As soon as I had snapped a few pictures and turned to go, a drunken black man wearing a blonde wig grabbed me to demand money for taking pictures of his things. I paid him from my pocket and continued down the street, taking pictures of old doorways and walls marked with graffiti. Often, when I make these photos, I try and include anonymous pedestrians as they pass by. As I wandered this way, two young women walked past and suddenly one stopped and turned to me, asking if  I spoke Portugese. I replied "No" and she asked "English?" I sasid yes, and she replied, "I will tell you that what you are doing is very dangerous. This is a bad area. Be careful because everyone is watching you!"

Tonight I go to the huge samba parade at the Sambadrome. Next week I hope to have my computer back and will try and post pictures.
Posted by Steve at Sunday, February 14, 2010
Email ThisBlogThis!Share to TwitterShare to FacebookShare to Pinterest
Labels: Brazil, Carnival, Color of streetlife, Mayhem, Rio de Janeiro