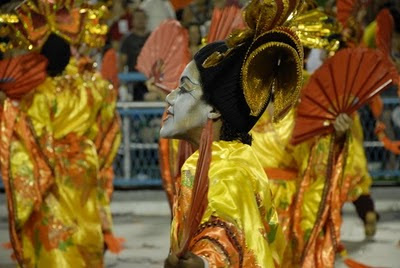 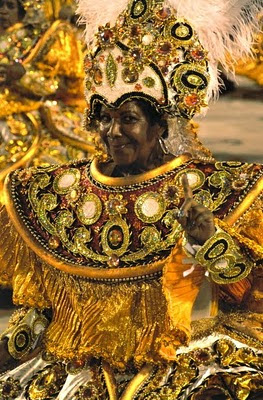 When at last I closed my eyes to sleep at 5AM, my last thoughts were not about the spectacular samba parade I had witnessed through the night. I could only think about the little boy I almost stumbled over while walking from the subway station to my hotel. He was alone, curled on his side, sleeping upon a piece of cardboard, with no shoes, belongings, or even a blanket. He looked about nine years old, and as dirty as his surroundings. The sight startled me and I almost stopped, but kept going without staring, ashamed that I had just come from an extravagant celebration among tens of thousands of revelers, and that I had spent lavishly for the privilege. When I arrived at my room I cried. There are many such abandoned children in Rio- they are children of the streets.

The samba parades have become such big events in Rio (see pictures), a special venue was created in their honor. The sambadrome is a glorified avenue, about quarter mile long with multi-tiered seating on both sides, holding perhaps 100,00 people. For four nights, various classes of samba groups parade through the sambadrome, starting at 9 PM and finishing at dawn. The lighting is very good, and music plays nonstop. Each group tries to outdo the others in extravagance, artistry and flamboyance, and comprises up to 5000 marchers and often, an accomanying float. The top groups are seen Sunday and Monday. I went Sunday and had a good view, which I paid handsomely for. When I left in the wee morning hours, I felt satisfied I had pictures I had come from the USA to get, and thought, okay, now if I am mugged, at least I have my carnival photos!

It rained a few days after carnival ended, and thankfully the smell of piss on the streets downtown finally washed away. 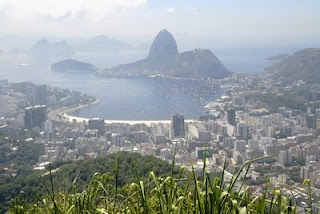 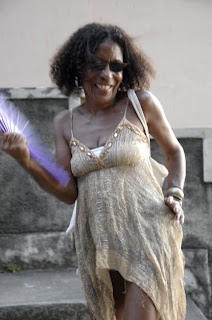 Many of the hillside neighborhoods have breathtaking views. For about 40 cents, a tram takes you on a winding course between downtown and a fun enclave above the city center, called Saint Theresa. I went there on a balmy evening, and briefly left the beaten track of galleries and bistros. A wall with exceptionally good grafitti caught my eye, so I chanced leaving the main street and began descending a broad flight stairs. A black woman with a flowing, gauzy dress cut high on one leg was climbing toward me. When she arrived beside me, I smiled and motioned to take her picture. She laughed and posed, waving her fan and dancing. Our tango lasted but a moment and then we gave each other thumbs up and turned to go. But she stopped and halted me, wagging a finger with a frown, pointing to the steps below. I motioned to the wall a few steps away, to satisfy her that I was not going into the dangerous favela.

I have thought of returning to Rio De Janeiro someday to do portraits. The people are colorful and I enjoy looking at them. Their features range from fair skinned and blonde to black- some with wavy hair and occasionally green or blue eyes. Many of the blacks have a fine blonde hair on their legs and arms. Everyone, black and white, have tan lines from being at the beaches.

The guys at the computer shop did not fix my laptop. This, after I waited an extra four days! "Because of carnival," they explained. So I will try to get it fixed in Buenos Aires where I arrive Sunday. I miss my computer! I have over 600 photos now, and want to work with them, among other projects. My frustration pales when I think of the children living on the streets. They are in THE DREAM and so am I . . . it has its own mysterious course it follows.

This is my 200th blog. They can all be found at My Fairy-Tale Life. They feed automatically to my facebook page.
Posted by Steve at Friday, February 19, 2010
Email ThisBlogThis!Share to TwitterShare to FacebookShare to Pinterest
Labels: carnival in Rio, favela, Rio de Janeiro, Samba parade, street children