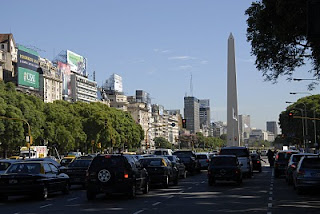 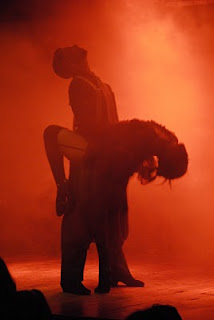 My apartment in downtown Buenos Aires is on Avenida 9 De Julio, the widest boulevard in South America. After the mean streets of Rio De Janeiro, Buenos Aires has felt much more civilized, and even safe. No one here has stopped to warn me to watch my back. The citizens have a bit of pride in the refinement of their city, which has a European sophistication and provincial air.
While Rio De Janeiro is reknowned for its samba, Buenos Aires is famous as the world center of tango. I went to a club called Cafe Tortoni to see a tango show. At 11 PM the show was beginning downstairs, below the main dining area. Adjusting my eyes to the darkness, I saw that the room was almost full, with people seated at small tables near a raised stage that had a set made to look like a bistro. As I found a seat, the musicians began playing the distinctive tango music, which leans heavily on violin, piano and accordian. The singer also performed as master of ceremonies and narrator. Soon, dancers arrived onstage and performed tango dances under colored lights and smoke effects blown onto the stage. I was mesmerized and lost track of time, so that when I went to the subway at 1 AM to go home, found it was closed, and walked instead.
Tango is a good example of eros informing art, because it depends on the tension between the male and female partners. You can say tango is the expression in dance and music of controlled sexual passion.
I went on Thursday to the Museo De Bellas Artes, but found when I arrived at 10 AM, that it was closed - until 12:30. So I began wandering and THE DREAM led me to a nearby cemetary. La Recoleta is where many of Argentina´s most famous people are buried. It is a fascinating place, where I spent the next two hours slowly walking among the impressive mausoleums and peering inside them.
If I expect THE DREAM to show me one thing, it often detours to go somewhere else, and I simply go with the current and find surprise. Yesterday I sought the Modern Museum, but found it closed for reconstruction. Walking through the nearby streets I discovered the neighborhood called San Telmo, where antique shops dot the cobblestone roads. By chance, I discovered Walrus Books, which is Buenos Aires equivalent of Shakespeare and Co. in Paris, France. It sells only books in English, mostly used but in good condition. I bought The Karamazov Brothers, by Fyodor Dostoevsky, which I am now reading for the second time. Later, I returned to San Telmo where a big flea market was unfolding on a square. Performers were on the streets, and of course, tango.
My iPhone has a neat application whereas when I tap the phone, it transforms into a compass, which has helped me numerous times.
The saga of my broken laptop continues. A Mac shop here diagnosed the problem as a faulty logic board. They said it would take twenty days to receive a part and repair my computer. I bought a ticket and made plans to take it to Santiago, Chile, and try and have it repaired quickly while I stayed with my friend Pierre, but there has just been a huge earthquake, and this morning as I prepared to go the airport, I learned the flight is cancelled. This is another aspect of THE DREAM having a life of its own. I have considerable frustration now, but I keep watching the movie; incredulous.
This blog is late because of numerous problems over the weekend, and I will not elaborate. . . but I have minimum control these days. Where will I be next, and when? Whatever.
Posted by Steve at Monday, March 01, 2010
Email ThisBlogThis!Share to TwitterShare to FacebookShare to Pinterest
Labels: Buenos Aires, earthquake in Santiago, Tango