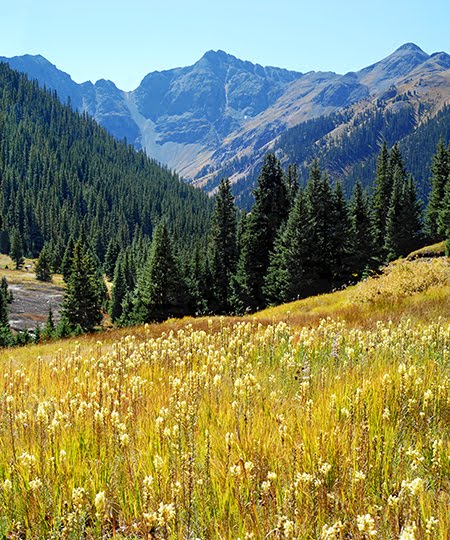 The adventure to Colorado began in earnest when my partner, Heidi of the Mountains, and I pulled off the road between Albuquerque and Durango to rest a moment and pee. A spectacular profusion of chamisa bush bloomed bright yellow in the late afternoon light, and as I exclaimed aloud in delight and dropped my zipper behind a tall bush, a distinct warning sounded. I looked to my side and barely a couple steps away a rattlesnake stood coiled, rattling its tail and staring at me. I remained relaxed, then after finishing my routine, I thanked the creature for the heads-up alert and left.

From past experience, I judged that the fantastic changing of the color of aspen tree leaves would begin the second week of September. Here in Santa Fe, because we are further south, the change is usually first week of October. The “quaking” aspen is Colorado’s state tree and the name is ubiquitous and used for towns, hotels, restaurants and more. Aspen leaves turn golden yellow when conditions are right—shorter days and cooler temperatures—and can be seen en-masse on mountain sides since they grow in clusters, sharing their root systems. The display is only one week long, and it is difficult to pinpoint start and finish times. I felt crestfallen discovering that most of the trees were green when Heidi of the Mountains and I arrived in Ouray, sometimes called the “Switzerland of America”. I kept wondering how I could have misjudged the seasonal change, but determined to enjoy the moments anyway and said to myself “what you see is what you get!” I produced a painting in the countryside and made the aspen trees golden rather than the green that I saw.

The day I painted, we hiked and took a trip to Telluride where a blues festival was happening for several days. The town is in a fantastic setting and has good shopping and easy access to fun outdoors activities. 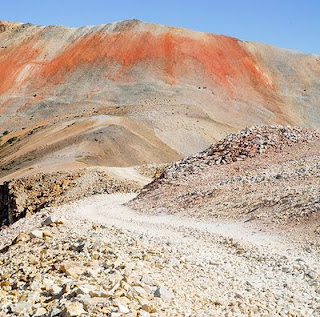 On Saturday, Heidi of the Mountains and I rented a jeep and headed to stark and unforgiving territory, on roads only accessible by all-terrain vehicles. Surprise! As we left town, whole hillsides had turned golden; seemingly overnight. In the morning light, it seemed as if nature had flipped a switch and turned on the color. The natural performance dazzled the senses and confounded the mind. Witnessing the sudden change turned my disappointment into joy and came as a gift: to be amidst the change as it occurred. Our jeep took us to dramatic places above 12,000 feet altitude, and along the way, the aspens blazed upward until they reached the end of their climatic comfort zone and where only fir trees grew. Higher up, in tundra regions, only small plants existed among the rock.

At times, the roads were so rocky and broken that the jeep rolled wildly from side to side as we inched our way along. Drop-offs were steep and perilously close to the narrow trails. Heidi of the Mountains insisted several times that I stop to let her walk rather than be in the jeep. We became lost a couple times but the views were so fantastic, I hardly cared. At the end of the day, we chose a route home that proved to be perilous and although I tried to assure Heidi of the Mountains that I would not let anything happen to her, she broke down crying. When we made it to the smooth highway, she was mad at me, but I could only say, “Look, Stevie has brought you back safe and sound! He won't let anything bad happen to Heidi of the Mountains.”

Our last day was spent hiking near Silverton. I returned to the same trail I had been on three weeks earlier with my ex-wife Jean and daughter Sarah. It is a hard hike from 9000 feet up to a lake basin area over 12,000 feet. Now, the aspen trees blazed gold colors along our mountain trek and when Heidi of the Mountains and I at last, with sore and trembling legs, gasping and out of breath, reached the top of our climb, an exquisite pristine and incredibly blue lake in a lovely basin surrounded by peaks dazzled our eyes. That evening we finally reached home at 11:30 PM exhausted but satisfied that we had experienced the fantastic. 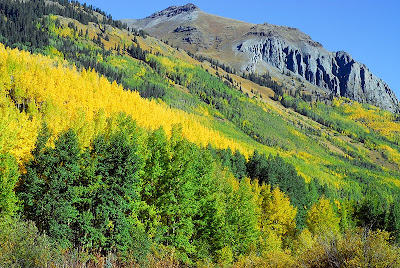 I took many photos on this trip, and will share them after I have sorted and processed the best.
Posted by Steve at Monday, September 20, 2010
Email ThisBlogThis!Share to TwitterShare to FacebookShare to Pinterest
Labels: adventure, Aspen trees, Autumn, Change of Season, Colorado, hiking in mountains, jeeping