The Burning Of Old Man Gloom 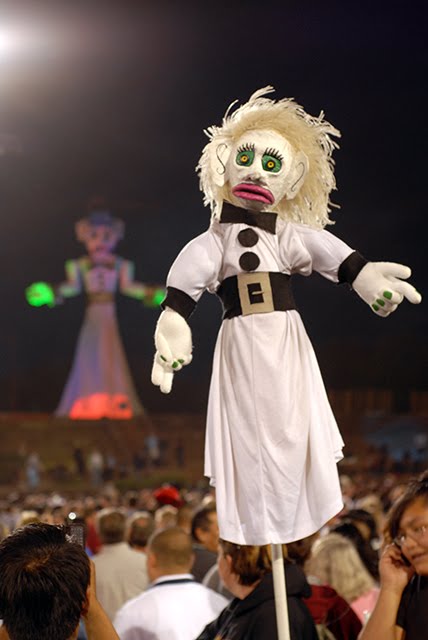 In Santa Fe every year at the beginning of Fiesta, people converge to an open field to watch the burning of Zozobra, also known as “Old Man Gloom”.

Zozobra is a hideous but harmless fifty-foot bogeyman marionette. He is a toothless, empty-headed facade. He has no guts and doesn't have a leg to stand on. He is full of sound and fury, signifying nothing. He never wins. He moans and groans, rolls his eyes and twists his head. His mouth gapes and chomps. His arms flail about in frustration. Every year we do him in. We string him up and burn him down in ablaze of fireworks. At last, he is gone, taking with him all our troubles for another whole year. Santa Fe celebrates another victory. Viva la Fiesta! - A.W. Denninger 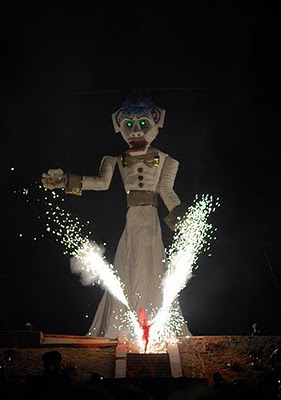 It is a tradition that is both a family event and a raucous frenzy. To gain entry into the field, people must pay a small admission that goes to charity, and have their bags checked for contraband, like guns or alcohol. Zozobra can be seen standing on a hill above the field. He is dressed the same every year, stands fifty feet high and stuffed with paper. His eyes are big and green, he has fat lips, his head swivels and his arms move, and he looks dapper and grotesque.

I had not been to a Zozobra burning in years. As night fell, live music rolled out over the crowd and when the field lights turned off, the big puppet began slowly moving—as if drowsily awaking from a long time of dreaming. Cries of “burn him!” arose, and an official announcer arrived to say Zozobra, Old Man Gloom, is sentenced to death so that Santa Fe can officially begin the Fiesta festival, and therefore, the time of his burning is to commence immediately. The crowd erupts as a fire dancer dressed in a flowing red gown appears at the base of the effigy and begins her hypnotic dance. Rhythmic music plays and more dancers appear, some twirling flaming rods. Fireworks go off and Zozobra begins flailing his arms, rolling his eyes, wagging his head and groaning. Some people in the crowd scream as if they are in primal scream therapy . . . especially piercing are the screams of teen-aged girls. The groaning of Zozobra is actually a carefully orchestrated and traditional performance by a “groaner” who, like the Wizard Of Oz, is backstage, behind a curtain, but his voice is amplified through rock concert speakers so that the ground shakes. More fireworks go off, perilously close to Zozobra who moans with each conflagration. The fire dancer prances at his feet and the crowd anticipation and frenzy grows. Parents lift their children to their shoulders so that they can see. All of a sudden it seems Old Man Gloom is lighting up from inside. His big, green eyes roll, his arms flail and his head bursts into flames. He wails loudly as the crowd cheers, and then the rest of his body catches fire. Fireworks blaze all around him and then suddenly, he disappears in smoke and flame. The last of the fireworks go off and Zozobra has been reduced to a smoldering bonfire where once a fifty foot tall structure stood. It is fantastic, and the crowd disperses into the night. 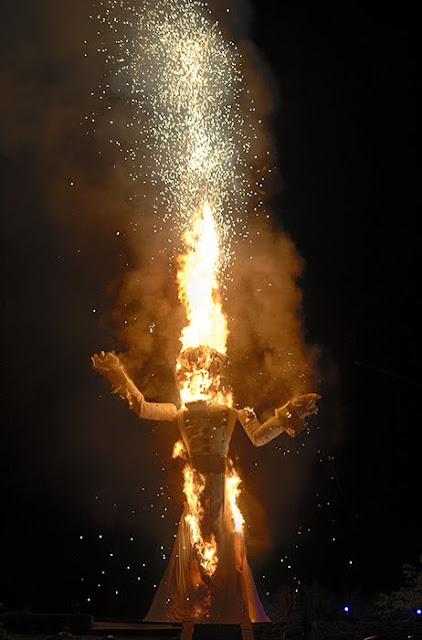 The burning marks the end of gloom and the beginning of Santa Fe Fiesta, the oldest continual community celebration in America. During the next three days are festivities and parades, dance and music, plenty of food and drink, and an art fair.

Your vivid description and dazzling photos put me right in the middle of the Zozobra celebration!