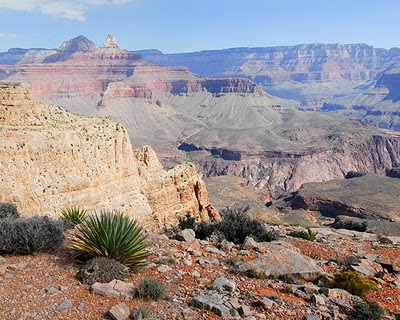 The last time I visited the Grand Canyon I was a brash and eager young man, footloose and on the road with a friend. We arrived and were struck with the magnitude of what lie before us,  then promptly set off to hike the famous Bright Angel trail that winds like a snake from the rim down the steep canyon walls to the river below. It was summer and although we were young and healthy, we were also naïve to think we could easily face off against nature at its grandest and swagger away. The temperature rose above 100 degrees Fahrenheit and our exertion eventually tired us so that we had to pull up short of the river and turn around. When we arrived back at the rim, we had met our limit and were bent-over exhausted.

In fact, many hikers overestimate their fitness level, become dehydrated and confused, and must be rescued. The Park Service, in an attempt to discourage hikers from feats which are beyond their abilities, now posts a picture at several trailheads of an attractive and fit young man with the caption, "Every year we rescue hundreds of people from the Canyon; most of them look like him".

Now, forty years later, I have arrived at the Grand Canyon once again; and appreciate it more. Such beauty and grandeur! It is 280 miles long, and the average width is 10 miles. Standing at the rim you see a spectacular panorama of sky and earth, with the canyon walls dropping a mile to the Colorado River below. And the colors make artists drool. Changing weather and light adds to the drama.

I hiked the Kaibab trail yesterday. It drops from the rim and winds down the steep canyon walls, eventually to end at the river. That would be a nine mile round trip so I only went part way, for six miles, stopping frequently to photograph. Perhaps because it is cooler in the fall and I am more prepared with snacks and power drinks, I endured the rigors better than when I was young. Sure, I am sore today, but will be back again and again. After traveling around the world, I can say this place, practically in my backyard, is one of the most grand and beautiful places on earth. 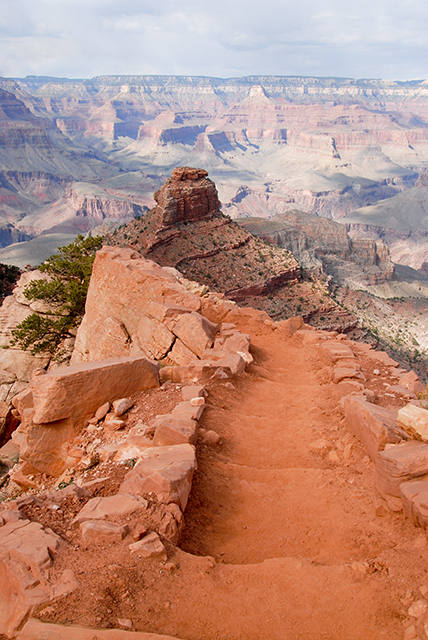 Scary beautiful photographs! I love the stunning colors, the feeling of depth and distance, the horizontals, the light & shadow. You've captured the grandness of the Grand Canyon!