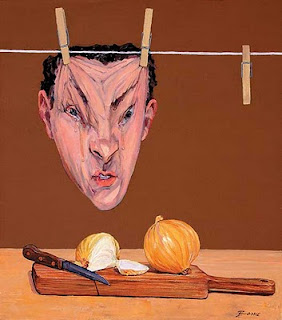 Of all animals, only human beings can be absurd. Other animals can act playfully, but not go beyond that into absurdity.

Absurdity is the parallel of rational thought, inverted. For instance, rational thought dictates being careful against self-injury while handling a gun. Absurdity is when an artist, in this case Chris Burden (born in Boston, Massachusetts in 1946), creates an art performance where he shoots himself in the arm. Rational thought says that when we wait for a person to arrive and they do not, we get up and leave. In the famous play by Samuel Beckett (13 April 1906 – 22 December 1989), called Waiting for Godot, two men wait endlessly and in vain for a vague person named Godot to arrive, and from the beginning it seems absurd. Yet, this play was voted "the most significant English language play of the 20th century".

There is use for the absurd. It can jog our minds to question our reality, and so keep us from falling into dogma. Comics use absurdity to make us laugh at life. We assume that we must take everything seriously, especially our selves, but absurdity says laugh at yourself!

In fact, people who take themselves too seriously risk becoming an absurd cartoon. Witness some of the tyrannical rulers in the middle east, who hold on to power at all cost and erect monuments to themselves, thinking themselves as gods worthy of universal admiration. They only see what they want to see, and when someone says, as in the Hans Christian Anderson (Danish, April 2, 1805 – August 4, 1875) story, The Emperors New Clothes, “but you are wearing no clothes”, the person is sent to jail or killed. So, this "absurdity" is only found among human beings, and it is like living in illusion. So many people live in illusion—and not another species of animal does that. 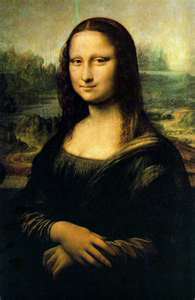 Artists can poke fun at absurdity and in fact that is part of their job. They work with materials to create realities that are mere illusion. The Mona Lisa, by Leonardo DaVinci (Italian, April 15, 1452 – May 2, 1519) is a painting, but her smile is so real. Pablo Picasso (Spanish, 5 October 1881 – 8 April 1973) makes a portrait and the woman has both eyes on one side of her head . . . this is absurd, but makes us think, what is real? Could a woman in a dream have two eyes on one side of her head? After all, dreams can be real too, since this is where we reside for about a third of our lives.

Some years ago I made a series of paintings called Hangups. The idea came to me as a funny vision from out of the blue that occurred while I was driving home one day. I saw a face hanging on a clothesline, just like it were laundry. Amused, I could have dismissed the thought, but I am an artist and the vision was so original I knew I had to make a painting of it. Eventually, I made over thirty, and published a book too (view here). People either love them or hate them, and there is no middle ground. This is the way good art is . . .  it has effect, for if it only inspires ambivalence, then it it is more suited to go in the trashcan. 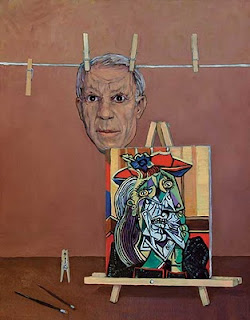 My Hangups are outwardly absurd, but reflect the absurdity that is parallel to reality. For instance, often people think they are immune to life’s disorders and especially, want immunity to death. But mortality has a way of chasing us like a shadow. When we get sick, or feel heartache, or see death, then we are shocked out of our illusion of safety. In my painting called “Pecking Order”, seen below, I push this to an absurd extreme.

If a person is too serious, these paintings are frightful and insulting, but on the other hand, look closely at “reality” and we can see the absurdity that runs so closely alongside of it. 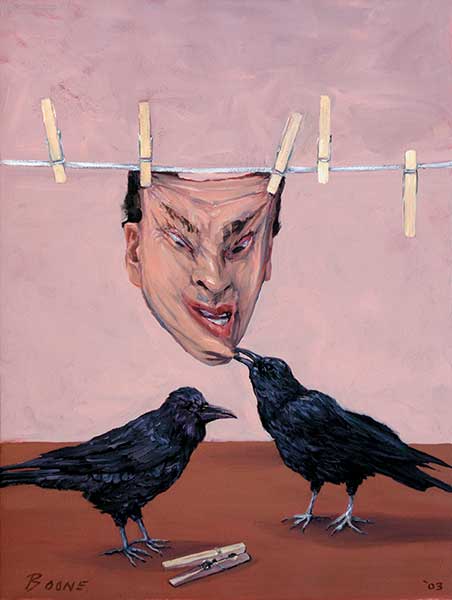 Posted by Steve at Sunday, March 27, 2011
Email ThisBlogThis!Share to TwitterShare to FacebookShare to Pinterest
Labels: absurd, reality, what is real? art and reality, writings of Steven Boone