Reflection From The Bottom Of A Well 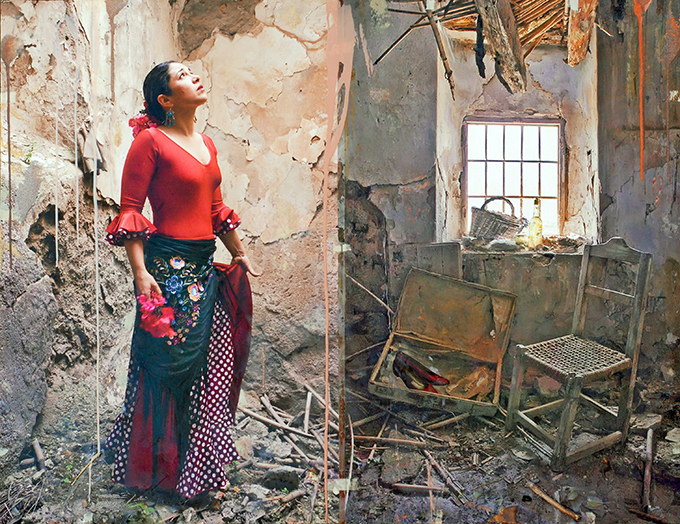 In most cases, people see art and respond to the surface, but only briefly. They may even own art, but see it as decoration. Especially, for this sort of public, art is, as Henri Matisse said, “a comfortable armchair which provides rest from physical expectation.”

A man I shall simply call Jim, met me during a presentation I made of photographs from my journey around the world (see: Journey Around The World ). He was fascinated with the experience and also wanted to see my artwork. I told him where my gallery is and he visited it on his own. Later, my gallery informed me that a person had greatly admired one of my pieces. It is a large 60” high x 90” wide mixed-media diptyche; meaning two images are placed side by side to make one. I placed an image of a young Spanish woman holding flowers and seated in a window, next to a scene of the ruined interior of an abandoned home. Moreover, the gallery told me that the man had, “spent hours” looking at this piece and wanted to buy it as soon as his finances would allow. Later, I learned that it was Jim who liked the piece. Subsequently, he visited frequently, and once brought a psychologist friend with him to analyze the art.

Soon afterward, by chance, I met Jim again and took the opportunity to invite him to visit my studio. A few days ago he came, and I found great pleasure in his visit. He is the rare person who goes so deeply into art that he is transported, and can express his thoughts about the experience. He helped me see into my own unconscious. In particular, we looked at a work, (seen above), that is similar and smaller than the one at my gallery. During our conversation, he noticed I had incorporated bits of masking tape. “It shows fragility, like it is holding together something that is falling apart.” Immediately I knew he had expressed what my true intent had been, but he was able to make it literal. “The work has a strong contrast . . . she is so strong, and clean, amidst the ruins and decay all around her. A strong figure in a world falling apart. The red clothes she wears signifies sexuality and fertility.” “Yes,” I agreed, “the art would be too depressing if she wore black.” “And what do you make of the drips?” I asked. Immediately he responded, “They are like tears.” Again, he had discerned my unconscious motive in the drips of paint.

When Jim spoke he gestured and moved back and forth in front of the art, sometimes pausing to peer deeply, his face almost brushing the surface, as if looking for a reflection from the bottom of a well. As he spoke his voice became passionate and I could see his excitement and yearning to discover. “This needs to be seen” he said.

When Jim left my studio, I was surprised how he had so thoroughly explored my artwork, and shared insights that had illumined my own mind.

I enjoyed reading about the depth at which this man looked at this piece of art, and how it reflected back to you. Claudia