Recently, a married couple came into my gallery and I noticed, as is almost always the case, a sense of wonder and also, hesitation. Artwork is personal and subjective, and invites a reaction. Sometimes, the work does not impress and it is dismissed, and then again, occasionally a work of art can cause a light to go inside the viewer. Sometimes, people fall in love with art.

In my front room are my landscape paintings but the couple strolled into my alcove area and the husband was the first to stop in his tracks. My alcove is where I show my paintings I call Hangups. It is a series that I made of faces hanging from clothespins, suspended on a clothesline. Usually, the initial response is bewilderment, and then it quickly goes to either like or dislike. There is no middle. Stopping in front of a painting called “Pecking Order”, of a face hanging from a clothesline and being pecked at by two crows, the man went from being startled, to bewilderment, to amusement and confirmation. I could almost hear him say to himself, “I know what that is like . . . I tried to tell someone but nobody understood. Now I am vindicated.” 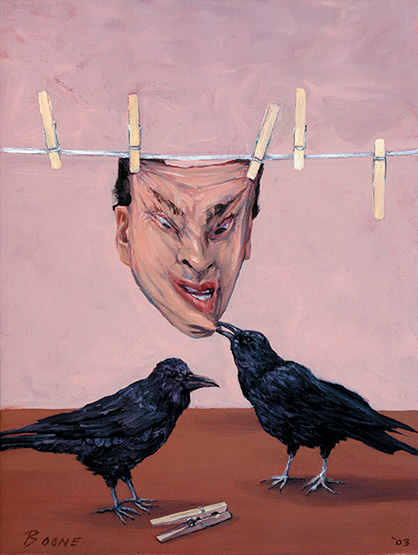 The couple walked through the rest of my gallery, speaking with Bill, my gallery director, and I. They were from Texas, where it has been very hot, and they enjoyed the change of climate in Santa Fe. We learned that they had not been married long, each coming from a previous marriage. We arrived back to the alcove and the gentleman spoke with Bill while I talked with his wife. They had both suffered loss, but were trying to get back to happiness. She told me she was eighteen years older than her husband, which surprised me greatly, and I said, “You don’t look it.” I could hear bits of Bill’s conversation and heard the man speak of his fight with depression in the past. Later, Bill told me it was because of divorce.
Finally, they both agreed they liked “Pecking Order” but could not afford it. I offered to make a pigmented inkjet print on canvas, the same size as the original at 1/6 th the price. The husband still hesitated, but the woman chirped in with a smile, “I will buy it for you as a Christmas present!”
I have made the copy and will send it off to Texas this week.