We Have Each Other 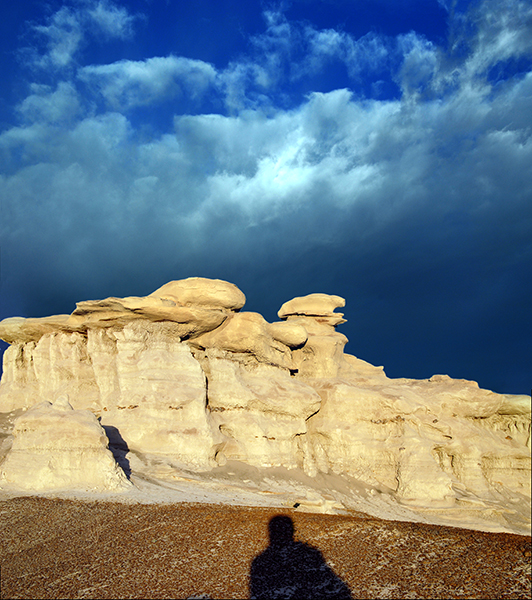 To arrive at the Bisti Badlands in New Mexico is like landing on another planet. No paved roads, no trees or shrubs—only barren, rocky land for miles. What is attractive is the pristine space, carved by rock forms shaped by time, wind, gravity and the elements.

Heidi Of The Mountains and I take one day a week to relax and spend time together away from pressing cares. We usually choose an adventure to share, although one day, we did nothing but sleep, read, and do some gardening. We chose to visit Bisti, and arrived at the Badlands in the dark, after driving 3 ½ hours from Santa Fe. The last two miles were dirt road, with no light. I parked at the end of the road and we got out to walk with our puppy, Chamo. The air was warm and noiseless. We tried to stay on the road while walking beneath a half full moon. We could only barely make out the forms of the rocky hills nearby. Heidi said, “As long as we have each other, we don’t need anything else.”

Later that night, the temperatures dropped and I argued with Heidi who did not want me to put the dog, who is getting hefty in size, outside. We were crammed into the back of my van, sleeping on a foam pad. The dog went out, but soon was scratching to get back in. Once inside again, he fell asleep with his head on my chest and started dreaming, then twitching in his sleep. Eventually, I settled him next to Heidi who does not mind him lying next to her. We all slept together until I woke at dawn and saw a rosy sky outside. The air was cold, but I arose to go out for a walk and photograph. Chamo came with me and we explored the stunning landscape. Despite my frozen hands, I took some nice pictures.

I had walked around mesmerized by the scenery and light, still sleepy—and got lost. Chamo did not understand my entreaties to “find Heidi.” We found the road, but I began walking in the wrong direction until I decided to turn around. At last, we arrived back to the van, and Heidi was waiting, concerned we had been gone so long.

When the three of us set out walking together into the badlands, we felt free and happy to be in such unusual and intriguing surroundings. Nobody else was around, and Heidi modeled nude among the rocks, under the big sky.

I had intended to paint in the afternoon, but after lounging in the van for a nap, the sky grew cloudy and a wind picked up force. We began driving back to Santa Fe. Along the way, we occasionally noticed derelict homes dotting the landscape. Heidi said, “How can people live out here?” I reminded her what she had said earlier, that we had each other, and so could be anywhere. She said, “I could not live here.” Then I smiled and kept my mouth shut.
Posted by Steve at Sunday, April 29, 2012
Email ThisBlogThis!Share to TwitterShare to FacebookShare to Pinterest
Labels: adventure, Art in Nature, Bisti badlands, marriage, nude