The Sky Above, The Earth Below 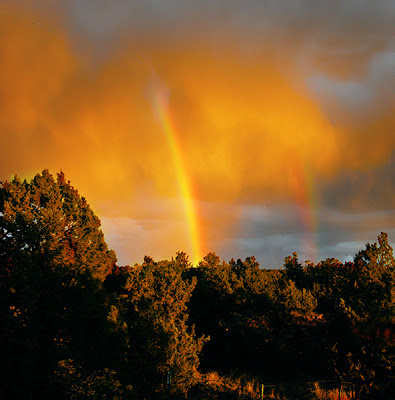 The sky above, the earth below. So is human existence given reference and meaning by nature.

The sky represents limitless possibility, spirituality, constant change, and by the succession of light and darkness—advancement, retrograde, and the struggle for progress. The earth represents nature, sustenance, and the cycle of life and death.

How potent is the combination of earth and sky! In between is a horizon where the two meet.

Two days ago, the autumn winds blew chilly air over Santa Fe, and marked the end of summer. The skies grew dark with clouds and hail fell down with a rat-a-tat-tat sound. My gallery closed at five o'clock, and I knew by the battle going on above, with glinting light darting down through the moving holes in the clashing clouds, that I must find a place to watch and photograph the drama unfold. I asked Heidi Of The Mountains if she wanted to go with me, but she declined and said she would meet me at a friend’s house on the outskirts of town where we are house sitting.

I drove to a park that overlooks Santa Fe, and walked in the cold, blowing rain. Not a soul was around as I looked toward the sun, blocked by clouds in the west—but the view was a grey one. Nevertheless, I knew the potential existed for a fantastic sight because everything was changing rapidly. Cold, I got in my car and began driving to the house. 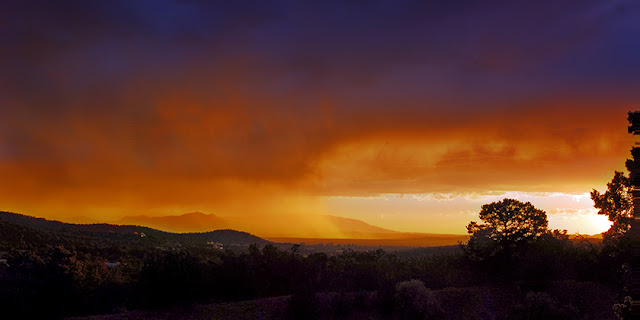 When I reached a two-lane highway going out of town, the sky was changing drastically. The setting sun was shooting rays of light low on the horizon and an ethereal color permeated the pregnant air. When I saw a rainbow, I pulled over to find a vantage point to capture it. I climbed a hill, but was stopped by a barbed-wire fence. Looking behind in the opposite direction I saw the plains and mountains veiled in supernal light. By now my artistic soul was completely enamored and excited. I had to find the perfect vantage to take pictures, even though I had no coat and was wet and shivering. Then my cell phone rang with Heidi complaining she was lost. I was only partly hearing her because my attention was focused on the sunset. Frustrated, she shouted in exasperation. I was torn, because the grand moment was about to disappear. I tried giving her instructions that she barely understood, and hung up. Turning once again to the drama unfolding, to my dismay, just then my camera battery gave out! Heidi called again, and I began driving back toward town to meet her. Along the way, I saw one of the most fantastic sunsets I have ever witnessed, and felt awe but also was chagrined that I could not photograph.
When it was all over and we safely arrived in the dark at the house on a mountainside, I felt something special had occurred, and while I “captured” some of it, the wild performance of earth and sky let me play along but could never agree to stop and wait.