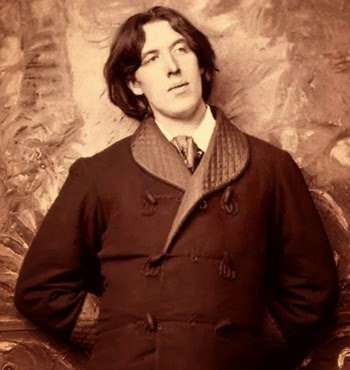 A couple of weeks ago I began reading, Oscar Wilde by Richard Ellmann. It is over 600 pages in small type, and a thorough and exhaustive look at this famous, complicated being. Over the years I have read elegant, cunning, and electric witticisms by Wilde—enough to make me interested in learning more about him. This biography took almost twenty years to write, and because of his comprehensive detective work, it seems that Ellman knows everything about the public and private figure of Wilde. There are so many biographical facts introduced, and all of Wilde's friendships, both academic, professional and personal, that I find the flow is slow and at times tedious reading, but very accurate. Because of Wilde's indomitable persona, it takes hold and won't let go.

Oscar Wilde's personality hinged upon pleasure and art. He was brilliant in language and could make a great impression upon people simply by his speaking. He thrived upon challenging the status quo, and in the end, this was his downfall. Wilde was homosexual, even though married with two children. His male lover, a younger man both handsome and quixotic, lured him into the dark paths of homo-erotic life, and in the end, Wilde was convicted in London of sodomy and sentenced to two brutally harsh years in jail. He lost everything—family, wealth, and health. The ordeal utterly devastated him and he died soon after his release. I have not yet read to the finish of the book. At this point, I have come to the section where, at the top of his fame and fortune, he has been in court, and is now facing his prison punishment. The downward spiral is violent.

“My ambitions do not stop with the composing of poems. I want to make of my life itself a work of art.”
Posted by Steve at Monday, February 10, 2014
Email ThisBlogThis!Share to TwitterShare to FacebookShare to Pinterest
Labels: biography, brilliance., homosexual, Oscar Wilde, wit